‘Crip Camp’: How a group of kids changed the world 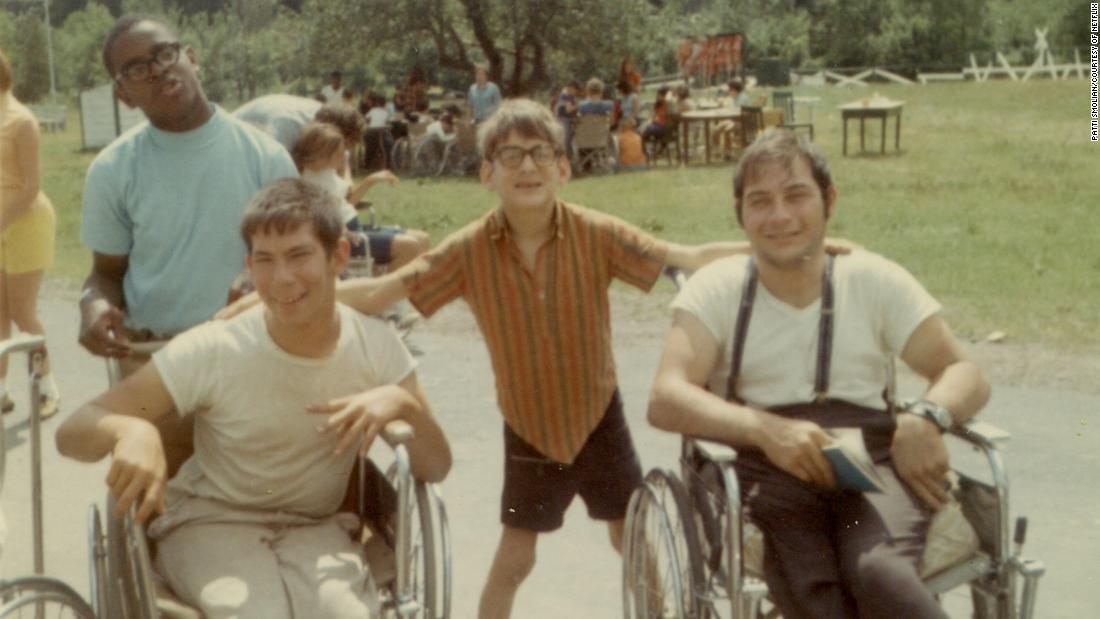 Yet that was the nickname given to Camp Jened, a summer camp for children, teens and adults with disabilities that operated in the Catskill Mountains of New York from 1951 to 1977. The camp is the subject of a documentary on the origins of the disability rights movement released earlier this year.

Before Americans began to see the falsehoods and dangers of such stereotypes, it was common to use terms like gimp, deformed, imbecile, freak, retarded and cripple to describe a person with a disability.

“Today that’s like the ‘N’ word, but that was what you were called in those days. You were seen as crippled and perceived not able to take care of yourself or accomplish things,” said retired Rep. Tony Coelho, who has lived with epilepsy since an accident at age 16.

Coelho recalled the emotional March day in 1990 when 60 protesters, including 8-year-old Jennifer Keelan, left their wheelchairs to crawl up the 83 steps of the US Capitol unassisted, arriving at the top bloody and bruised but undeterred from their goal of persuading Congress to pass the defining legislation.

“The young people getting out of their wheelchairs, not able to use their lower extremities, but still crawling up those marble steps … ” said Coelho with obvious emotion.

“All of a sudden it was visual: The Capitol steps are not inclusive for people in wheelchairs and for people with disabilities. I knew this was going to really change things. We passed the bill in the House by a big margin.”

Among those protesters were a number of former “Crip” campers. Most spent their summers there during the protests of the late 1960’s and early 1970’s, when the camp counselors, mostly college students, were heavily influenced by hippie counterculture.

Strict rules and the typical structure of camp life were discarded and “Crip Camp” became a place to experiment with drugs, sex, independence and grand ideas for change.

For young people who were used to the world seeing them as incapable and unworthy, the experience was transformative.

“Even when we were that young, we helped empower each other. It was allowing us to recognize that the status quo is not what it needed to be,” said former camper Judith “Judy” Heumann, who had polio as a child and uses a wheelchair.

Heumann is one of the starring characters in “Crip Camp: A Disability Revolution,” which captured acclaim at the Sundance Festival and was released in March on Netflix. The film was produced by Higher Ground Productions, the company founded by former President Barack Obama and former first lady Michelle Obama

Raw and powerful, shocking and inspiring, the documentary follows Heumann and other former campers as they become nationally visible activists during the 1970s and into the 1980s.

“Crip Camp is both a gripping look at the history of the disability rights movement and a timely call to action, urging us to explore our own duty to fight for the dignity of all people,” Obama said in a statement.

Just out of college in 1969, Heumann applied for a teaching license but was told she was a fire hazard. She sued for discrimination and won. In 1970, she began a disability rights group to advocate for the independent living movement.

In 1977, she and more than 100 disabled activists — including several former Crip Camp alumni — staged a 28-day sit-in at a San Francisco federal building in a bid to influence regulations that were defining the rights of people with disabilities. The dramatic and successful event captured the attention of the nation and set the stage for the 1990 passage of the Americans with Disabilities Act.

“We demonstrated to the entire nation that disabled people could take control over our own lives and take leadership in the struggle for equality,” Heumann said.

Despite the hard-won advances of the last 30 years under the ADA, there are still major hurdles facing the 61 million Americans who have hearing, sight, mobility or cognitive challenges.

“The anniversary is really great; it’s important,” Coelho said. “We’ve made a lot of progress, but we need to do more.”

Health care is a major issue for the community. “Adults with disabilities are three times more likely to have heart disease, stroke, diabetes, or cancer than adults without disabilities,” according to the US Centers for Disease Control and Prevention.

During the coronavirus pandemic, those disparities have become pronounced, with many states choosing to triage people with disabilities, Coelho said, putting them last on lists for ventilators and other lifesaving measures.

“We’re aggressively working to change it and we’ll get there. But can you believe they would actually do that in this day and age?” he said.

Another issue that has come to critical mass during the pandemic is a lack of web accessibility.

Some 98% of the top 1 million websites failed guidelines that would make their sites easier to read, navigate or understand, according to the 2020 WebAim Million, an organization that produces a yearly ranking of web accessibility for individuals with disabilities.

Why would being able to fully navigate a website be such a burning issue? Just think about how you pay bills, shop, find a doctor and make an appointment — and especially in the time of Covid-19 — order groceries and anything else.

Because the internet was still an infant at the time the ADA passed, the legislation doesn’t directly cover digital accessibility. But it needs to and now, advocates say.

“There have been lawsuits filed — in 2019 over 2,000 were filed and one of them got all the way to the Supreme Court and won,” Coelho said. “Now the issue is how do we get legislation as opposed to a court decision?”

Redesigning a website to fix accessibility issues can be a huge investment, so companies have sprung up that retrofit current designs. Fixes might include the ability to increase volume and font size, adjust contrast, caption pictures and streamline links, which disability advocates say often benefit the rest of us with fading hearing and eyesight as well.

“What people don’t realize is that an accommodation made for someone with a disability actually becomes a convenience for people without the disability,” Coelho said, pointing to an example in the physical world.

“Take curb cuts on streets in neighborhoods,” he said. “They help bicyclists cross the street as much as they assist those in wheelchairs.”

If companies — and the nation — could take an inclusive attitude and realize they are not just helping those with disabilities, but everyone, the battle for equal rights for people with disabilities would be won, advocates say.

Until then, people with disabilities will continue to speak out proudly, demanding their full rights as American citizens, just as those kids did so many years ago in “Crip Camp.”

“I thank God for my epilepsy because it’s made me a stronger, better person, but a lot of us in the community feel that way,” Coelho says. “We don’t feel like we’re handicapped. We feel like we got something that makes us better and stronger, and we’re going to be out there fighting.”