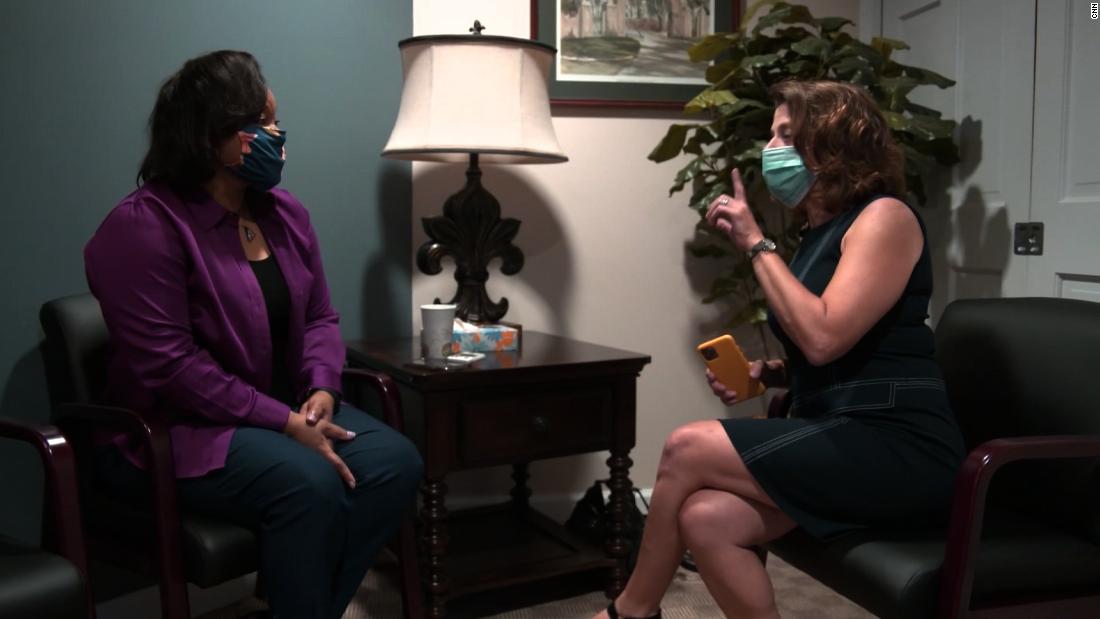 That morning, Baker, a news anchor at CNN affiliate WTOC in Savannah, Georgia, became the first volunteer to receive an injection in the first Phase 3 clinical trial of a coronavirus vaccine in the United States.

The many lives lost and impacted by the coronavirus pandemic inspired Baker to volunteer.

“This is really, to me, very empowering that I could be that person who could help save some lives. It’s been very heartbreaking to hear about people who’ve lost their lives because of this,” Baker told CNN senior medical correspondent Elizabeth Cohen at the Meridian Clinical Research site in Savannah on Monday.

“I never thought that I’d do something like this,” Baker said. “I just hope that they’re really, really good results. I know a lot of people are doing a lot of different vaccine trials.”

The race for a Covid-19 vaccine continues around the world. Globally, at least 25 Covid-19 vaccine candidates are being tested in people, according to the World Health Organization. Five of those are in Phase 3 trials, the most advanced stage of testing before a vaccine goes to market.

The investigational Covid-19 vaccine being tested in the Phase 3 trial in the United States was developed by the biotechnology company Moderna and the National Institute of Allergy and Infectious Diseases, part of the National Institutes of Health. The trial is to be conducted at 89 US research sites, according to the NIAID.

It’s “the fastest from the time a virus, a pathogen, was identified to the time it actually goes into a Phase 3 trial, literally in the history of vaccinology in the United States at least, and maybe even throughout the world,” NIAID director Dr. Anthony Fauci said during a NIH event on Facebook Live on Monday.

The Phase 3 trial is expected to enroll about 30,000 adult volunteers to evaluates the whether the Moderna/NIH vaccine can safely prevent symptomatic Covid-19 after two doses, among other outcomes. Volunteers will receive either two 100 microgram injections of the vaccine or a placebo about 28 days apart. Investigators and participants will not know who has received the vaccine.

Baker was not told whether she received the vaccine or a placebo. Just moments after receiving her shot, Baker told CNN’s Cohen that “it was painless” and over before she even realized.

While at the research site in Savannah, Baker thought about her colleague Lyndsey Gough — who is among those who have been affected by the coronavirus.

Gough, a reporter at the WTOC news station, went from reporting on the coronavirus to testing positive for Covid-19 in late June. Gough, 27, spent 11 days in the hospital battling the illness.

“It really just broke my heart because she’s such a young, strong, energetic young lady who is just on fire about what she does, and to see her afterwards, she was so weak, and to also know what could have happened to her. She lost her appendix because of Covid,” Baker said, adding that Gough is now at home.

‘All of us are responsible for doing our part’

Monday wasn’t the first time that Baker has volunteered for a medical cause.

Baker participated in a medical mission to Ghana with the Goodness & Mercy Foundation, according to her bio on the news station WTOC’s website. She returned from that mission in June 2006. Then the following year, in February 2007, she participated in a medical mission to Guatemala with a group called Faith In Practice. A few months later in September, she spent a week working with Goodness & Mercy Foundation in Ajalli, Nigeria.

“It is my belief that all of us are responsible for doing our part to improve the quality of life for our fellow man,” Baker wrote in her bio.

Now, Baker not only makes history as the first volunteer to receive a shot in the Phase 3 trial — but also as a Black woman volunteer participating in the trial.

Black and Brown communities have been disproportionately hit hard by the coronavirus pandemic. Doctors are working to get a racially diverse group of volunteers participating in the vaccine study.
“African Americans have a history of — for good reason — being concerned about medicine. In the past, we’ve been subject to all kinds of experiments where we didn’t know what was going on,” Baker said. For example, in the infamous Tuskegee experiment, Black men were subjects in a syphilis study without their consent, and were not offered penicillin to treat their disease.

“I have heard a lot of friends of mine and even relatives who said that, you know, ‘I won’t be the first person to get this vaccine. I don’t want to be the guinea pig. I’m going to wait and see what happens first.’ So they’re very suspicious. So maybe since I was at least bold enough to come forward right now, that might change that — that could eventually save their lives,” Baker said. “I hope that maybe just seeing my face will help them to change their opinions about that.”

CNN’s John Bonifield and Lauren Mascarenhas contributed to this report.