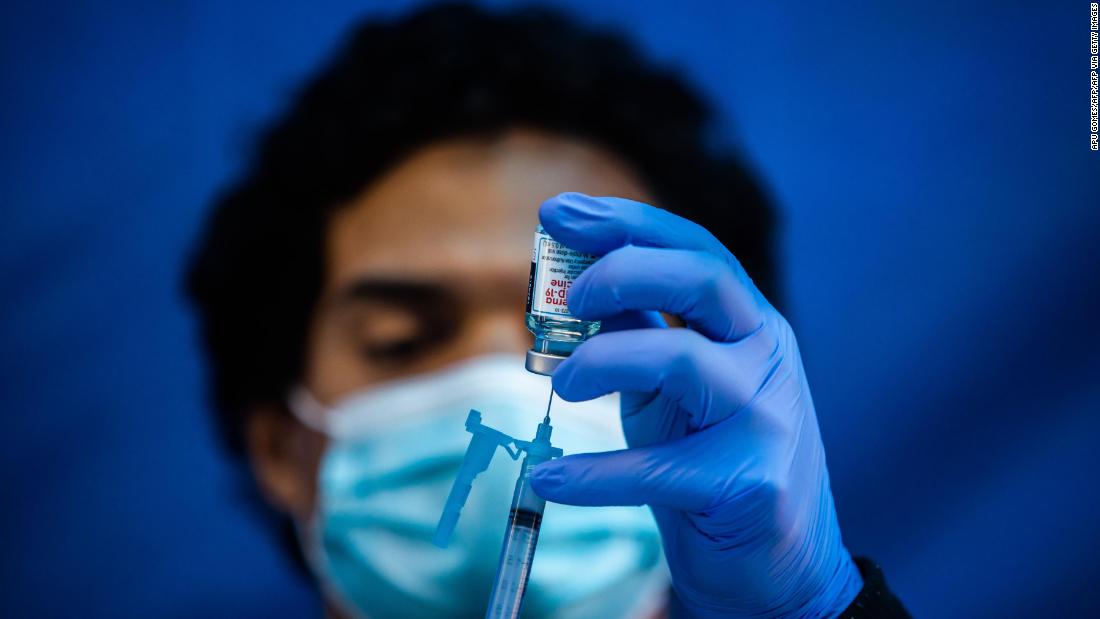 He later clarified with a second tweet that he wasn’t recommending that it was 100% the way to go, but that it was worth “giving states the flexibility to try it.”

Although 80.5 million vaccine doses have been administered in the United States and the single-dose Johnson & Johnson vaccine is entering the US supply, demand still far outpaces the number of vaccines available.
That has not swayed vaccine makers, the US Food and Drug Administration or the CDC to shift toward single doses to cover more people sooner.

Dr. Anthony Fauci, director of the National Institute of Allergy and Infectious Diseases, told CNN’s Erin Burnett on Wednesday that Adams’ tweets were not accounting for the impact of virus variants, which can decrease the amount of protection from vaccines.

“First of all, I love Jerome Adams. He’s really a terrific guy. We worked so well together during the Trump administration,” Fauci said. “I think he’s incorrect on this.”

By going with just one dose, “you’re at a very tenuous level. Good enough to do protection, but if you diminish it by fivefold, you fall off the chart of protection.”

The mRNA vaccines were authorized for use in the US based on clinical trial data that shows two doses of the vaccines taken a few weeks apart are about 95% effective at preventing symptomatic infection. Clinical trials for both vaccines show that the second dose gives a big boost to protective antibodies.

C
DC guidelines continue to advise two doses of the Pfizer and Moderna vaccines, and experts at the CDC’s Advisory Committee on Immunization Practices (ACIP) meeting on Monday said there’s insufficient scientific evidence to support a vaccination strategy that would delay a second dose or eliminate it all together.

“Five studies have shown that postponing the second mRNA dose may leave some people less protected against the SARS-Cov-2 variants,” the CDC’s Dr. Heather Scobie said at the ACIP meeting.

Fauci told The Washington Post this week there are “risks on either side” of switching to a single dose or sticking with the two. Experts worry that a single dose strategy could lead to more coronavirus variants, and create more doubt and confusion during an already complicated vaccine rollout.
“We’re telling people [two shots] is what you should do … and then we say, ‘Oops, we changed our mind’?” Fauci said. “I think that would be a messaging challenge, to say the least.”

That doesn’t mean there won’t be more dosing changes to come.

Around the world, researchers are looking into the efficacy of single doses of mRNA vaccines. Meanwhile, the J&J vaccine — currently authorized as a single-dose vaccine — is also being trialed as two doses to see if it will provide more protection.

Some countries are already employing single-dose strategies as a way to stretch their supply and offer some protection to more people.

Since late December, the UK has not told people to skip the second shot, but it has delayed the second doses of the Pfizer/BioNTech vaccine to prioritize first doses. The delay meant that the interval between doses could be extended up to 12 weeks instead of about three.

In reaction to the vaccine schedule change, Pfizer said at the time that it did not test its vaccine this way.

“Pfizer and BioNTech’s Phase 3 study for the Covid-19 vaccine was designed to evaluate the vaccine’s safety and efficacy following a 2-dose schedule, separated by 21 days,” Pfizer said. “There are no data to demonstrate that protection after the first dose is sustained after 21 days.”

There has been some research that suggests the Pfizer/BioNTech vaccine provides some protection after one dose.

Researchers at Israel’s largest hospital looked at what happened after 7,000 staff got vaccinated with the first dose of the Pfizer/BioNTech vaccine. By the second to fourth week after they got the first shot, rates of symptomatic infection were down by 85%.

However, it’s still not clear how long this protection would last. Also, the study noted the people who were vaccinated were “younger and healthier” and may not reflect the broader population.

There’s some research, too, that suggests one dose might be enough for people with a previous infection. Two papers published last week in The Lancet found that just one dose of Pfizer/BioNTech’s coronavirus vaccine can induce a strong enough immune response in people who have already had the coronavirus that it could protect from future infection. France has already recommended that people previously infection get only one dose.

A
nd in a letter sent to the New England Journal of Medicine in February, Canadian researchers went through the documents Pfizer/BioNTech submitted for the emergency use authorization last year and concluded that a single dose is still at least 90% effective.

“With such a highly protective first dose, the benefits derived from a scarce supply of vaccine could be maximized by deferring second doses until all priority group members are offered at least one dose,” they added.

But, they noted it’s still unclear how long protection lasts with just one dose.

CNN’s Lauren Mascarenhas and Maggie Fox contributed to this report.