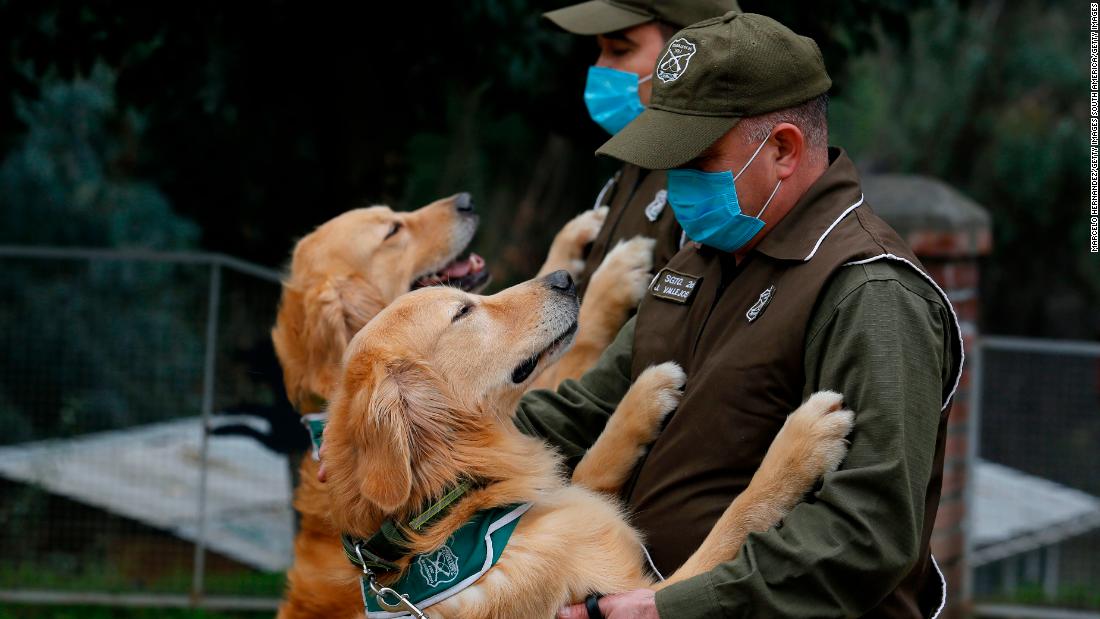 The so-called “bio-detector” dogs are expected to complete training by mid-September and will be deployed to places with high concentrations of people, according to the Chilean police.

“A dog can detect, in an hour, it can sniff 250 people. So when we begin opening stadiums, schools, businesses, restaurants, it will be essential that in those places that are being opened, as we seek normalcy, we can now add our bio-detector dogs,” said Colonel Julio Santelices from the Chilean police.

Chile has slowly beaten back the virus since its peak in June, and on Sunday announced a five-stage “step by step” reopening plan toward economic recovery.

For now, its dog-sniffer program is small, with just four pups in training. Chile’s National Police and the Catholic University of Chile (Pontificia Universidad Catolica) are collaborating to train three Golden Retrievers and one Labrador to detect “a new odor” — the smell of Covid-19 patients, according to university professor and veterinary epidemiologist, Fernando Mardones.

“The selected dogs have years working on the detection of drugs, explosives and other types of things. For them, it is simply learning to detect a new smell, a new aroma,” Mardones told CNNE.

Coronavirus does not have a smell per se, but sufferers’ sweat may be recognizable to dogs, Mardones said.

“A body that contracts Covid-19 generates volatile organic compounds. A sample is taken from a person in the early stages of the infection. A gauze is left for about 15 minutes on an individual’s underarm. That’s the sample we store and use to train the dogs with,” he told CNNE.

The dogs can take from two weeks to two months to be fully trained. The canines are being taught to sit next to individuals whom they have detected as likely carriers of the coronavirus, instead of “pawing” the person as they do when sniffing drugs, the Chilean police told CNNE.

Similar trials have also taken place in the UK, where dogs were given face masks and nylon socks to help train them to sniff out Covid-19 ahead of potential deployment in airports, assisting the troubled travel industry.