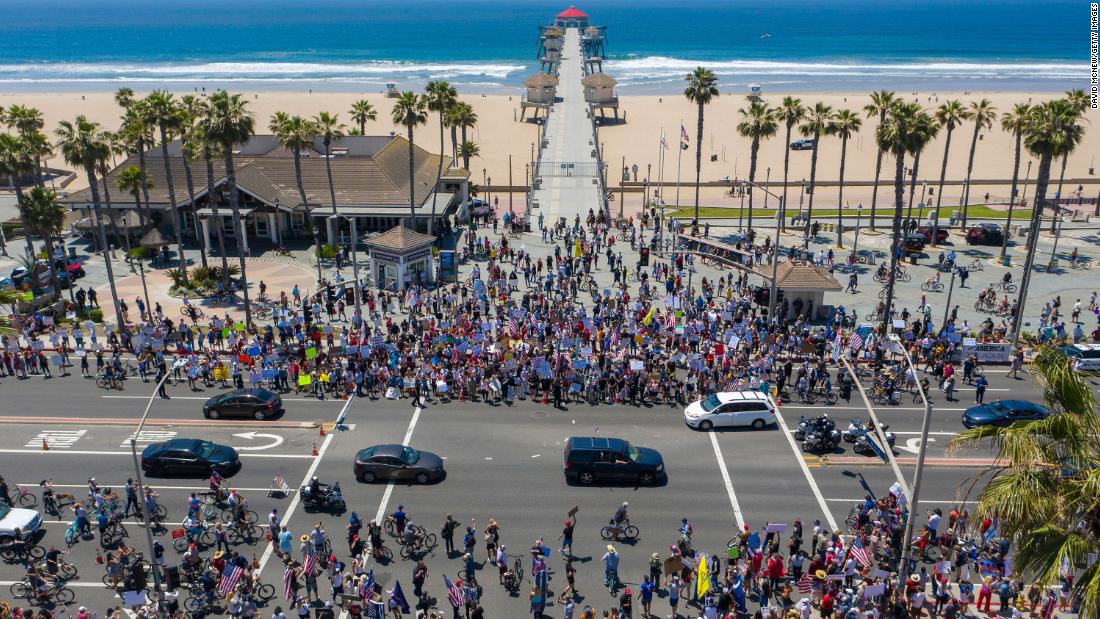 Life is taking another step toward normalcy for many states Monday. Restaurants, salons, spas, tattoo parlors, shopping malls and gyms will all be open to residents of Yuba and Sutter Counties in Northern California. Groups of up to 25 people can once again gather in Indiana, and Kansas is lifting its stay at home order — and beginning the first phase of reopening.

On Sunday, New York City Mayor Bill de Blasio thanked the New York Police Department and the Parks Department for enforcing social distancing guidelines as well as the agencies that handed out face masks over the weekend as people flocked to reopened parks. Outdoor spaces were also open to residents of Pennsylvania and New Jersey.

But some would like to see reopenings happen faster. Thousands gathered in California over the weekend to protest coronavirus restrictions, leading to 32 arrests at the state’s capitol.

States take on the virus

While states wrestle with how and when to reopen from the coronavirus closures, some are enacting measures to ensure they are equipped to fight the pandemic.

Health experts have cited testing as a key factor for the states hoping to open safely.

Over the weekend, Illinois recorded its highest number of new tests performed in a 24-hour period at 19,417 tests.

To address concerns over access to enough tests, de Blasio said New York City will produce its own testing kits. Partnering with Print Parks, the city is on track to produce 50,000 3D-printed swabs per week, de Blasio said.

Numbers improve, but a backlash could be coming

For many states, the numbers around the coronavirus pandemic look optimistic.

Kentucky Gov. Andy Beshear told reporters Sunday that the state’s coronavirus cases were “at the worst” plateauing. He thanked residents for their social distancing efforts.

“You are saving thousands of lives,” he said. “I’m very proud to be your governor.”

Cuomo reported that the number of intubations in the state hit hardest by coronavirus is down, and the total number of hospitalizations is below 10,000 for the first time since March. The Javits Convention Center field hospital in New York City discharged at least eight patients on Friday, including its last, Northwell Health spokesman Terry Lynam told CNN.

But the improvement does not mean the nation can completely let down its guard.

Boston Mayor Marty Walsh said numbers in his city are going up, and he is concerned about relaxing restrictions.

“We’re still very much in the beginning days of coronavirus,” Walsh said.

White House Coronavirus Task Force member Dr. Anthony Fauci also warned that lifting measures prematurely could lead to a rebound of the virus that could put the US in the “same boat that we were a few weeks ago.”

And a second round of the virus, he said, is inevitable. Its severity will depend on how prepared the nation is, he said.

While Fauci and other doctors predict a second wave of coronavirus, there is hope the US will be armed with a new tool in that fight.

The US Food and Drug Administration approved the experimental drug remdesivir as treatment for hospitalized patients with severe coronavirus.

In an emergency-use authorization Friday, the agency said the benefits of using the drug outweighed the risks.

Remdesivir is the first authorized therapy for the virus in the country, FDA Commissioner Stephen Hahn said.

“This is an important clinical advance that showed a statistically significant reduction in time to recovery for patients with Covid-19 and is the first authorized therapy for Covid-19.” Hahn said.

The drug was approved just days after researchers said it might help patients recover more quickly from the infection.

The federal government will begin shipping “tens of thousands” of courses of remdesivir early this week and will decide where the medicine goes, according to Daniel O’Day, chairman and CEO of Gilead Sciences, the maker of the investigational drug.

“We intend to get (remdesivir) to patients in the early part of this next week, beginning to work with the government, which will determine which cities are most vulnerable and where the patients are that need this medicine,” O’Day said on CBS’ “Face the Nation” on Sunday.

CNN has reached out to the US Department of Health and Human Services for comment on how the drugs will be distributed.