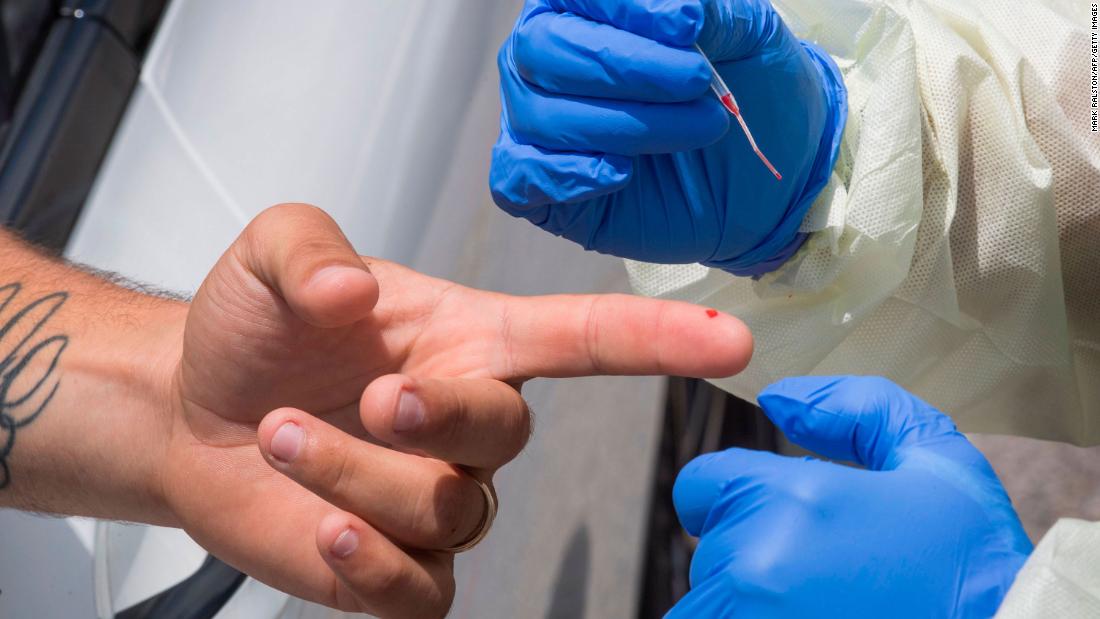 The paper, released on the medical server medrxiv.org on Saturday and not yet published in a peer-reviewed medical journal, suggests that antibody responses may start to decline 20 to 30 days after Covid-19 symptoms emerge. Antibodies are the proteins the body makes to fight infection.

“We show that IgM and IgA binding responses decline after 20-30 days,” the researchers from institutions in the United Kingdom wrote in the paper, which also found that the severity of Covid-19 symptoms can determine the magnitude of the antibody response.

The new study included samples collected from 65 patients with confirmed Covid-19 up to 94 days after they started showing symptoms and from 31 health care workers who had antibody tests every one to two weeks between March and June.

Since early on in the pandemic, the World Health Organization has warned that people who have had Covid-19 are not necessarily immune from getting the virus again.

Yet the new study had some limitations, including that more research is needed to determine whether similar results would emerge among a larger group of patients and what data could show over longer periods of time when it comes to infection with the coronavirus, named SARS-CoV-2.

“This study has important implications when considering protection against re-infection with SARS-CoV-2 and the durability of vaccine protection,” the researchers wrote in the paper.

What this means for a Covid-19 vaccine

Even though it has yet to be peer reviewed, “the importance of this study is clear and the research has been rigorously undertaken,” Stephen Griffins, associate professor in the University of Leeds School of Medicine in the United Kingdom, who was not involved in the new study, said in a written statement distributed by the UK-based Science Media Centre on Monday.

“This work confirms that protective antibody responses in those infected with SARS-COV2, the coronavirus that causes COVID-19, appear to wane rapidly. Whilst longer lasting in those with more severe disease, this is still only a matter of months,” Griffins said.

“Similar short-lived responses are seen against other human coronaviruses that predominantly cause only mild illness, meaning that we can be re-infected as time goes by and outbreaks can adopt seasonality. With the more serious, sometimes fatal, outcomes of SARS-COV2, this is troubling indeed,” Griffins said. “Vaccines in development will either need to generate stronger and longer lasting protection compared to natural infection, or they may need to be given regularly.”

As of last week, there were 21 Covid-19 candidate vaccines in clinical evaluation globally, according to WHO.
“Even if you’re left with no detectable circulating antibodies, that doesn’t necessarily mean you have no protective immunity because you likely have memory immune cells (B and T cells) that can rapidly kick into action to start up a new immune response if you re-encounter the virus. So you might well get a milder infection,” Dr. Mala Maini, professor of viral immunology and consultant physician at the University College London in the United Kingdom, said in a statement also distributed by the Science Media Centre on Monday.
B cells produce antibodies to neutralize infectious microbes, like a virus, and T cells attack the infection directly and help control the immune response. When a person has been infected before, those cells might remember the infection and amp up the immune response, leading to a re-infection possibly being less severe than otherwise.

“But this study does reinforce the message that we can’t assume someone who has had COVID-19 can’t get it again just because they initially became antibody positive,” said Maini, who was not involved in the study. “It also means a negative antibody test now can’t exclude you having had COVID-19 a few months ago. And it suggests vaccines will need to be better at inducing high levels of longer lasting antibodies than the natural infection or that doses may need to be repeated to maintain immunity.”

‘Incomplete, transitory and then disappear’

The new paper adds to a growing body of evidence suggesting that natural immunity to Covid-19 with antibodies may not last as long as hoped — and that the level of severity of the initial coronavirus infection can be linked to the magnitude of antibody response.

In June, a small study found that people who have coronavirus infections but never develop symptoms could have weaker immune responses to the virus.

That study, published in the journal Nature Medicine, found that a group of about three dozen Covid-19 patients who were asymptomatic had levels of antibodies that were significantly lower than what was found among patients who had mild symptoms — a finding that suggests the asymptomatic patients had weaker immune responses.
Then last week, a Spanish government study found that just 5% of people in Spain have coronavirus antibodies and in a potentially worrying development, the study also indicated that people’s immunity to coronavirus wanes after just a few weeks. The findings show that 95% of Spain’s population remains susceptible to the virus.

This means that any perceived immunity “can be incomplete, transitory and then disappear,” Dr. Raquel Yotti, head of the Carlos III Health Institute, a key government agency leading the study, said in a news conference at the time.

The study “reflects the difficulty of obtaining herd immunity in the short term,” the Health Ministry said in a statement. Herd immunity is achieved when enough of a population has become infected with a virus or bacteria — or vaccinated against it — to stop its circulation.

Spain’s study from April to June involved more than 61,000 participants — which the European Center for Disease Prevention and Control told CNN appears to be the largest to date in Europe.