Covid-19 death count in the United States is likely an underestimate. Here’s why. 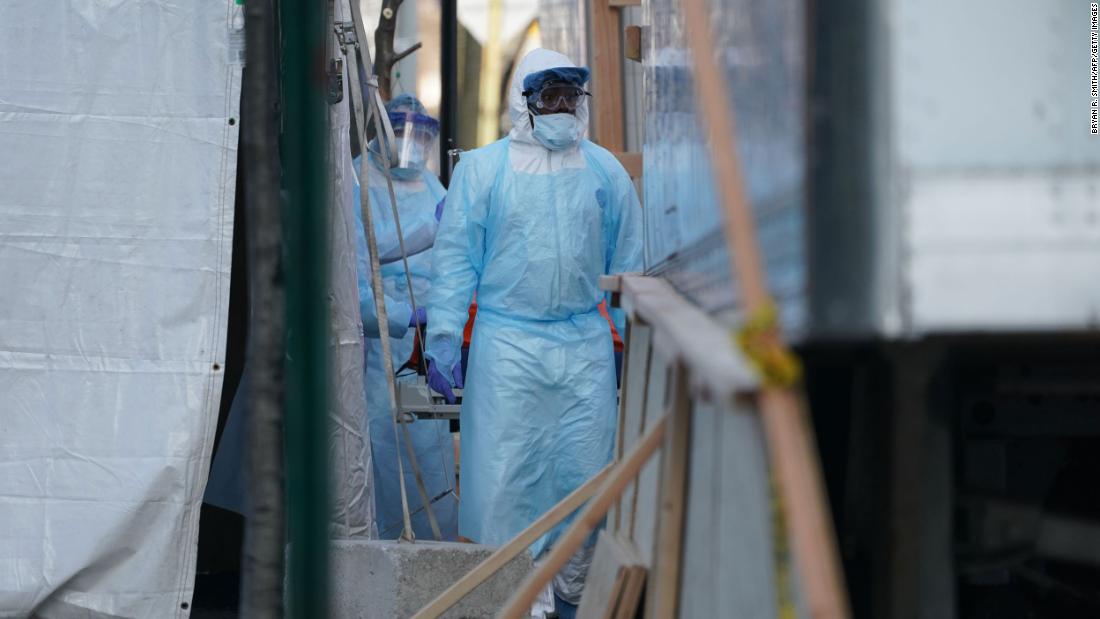 Also, deaths due to Covid-19 “may be misclassified as pneumonia deaths in the absence of positive test results, and pneumonia may appear on death certificates as a comorbid condition,” the CDC noted, adding that “analyses to better understand and quantify reporting delays” for Covid-19 deaths and “related causes” are underway. In March, the CDC introduced a new code to accurately capture mortality due to Covid-19 on death certificates.

With that code, the CDC noted that Covid-19 “should be reported on the death certificate for all decedents where the disease caused or is assumed to have caused or contributed to death.”

When it comes to an accurate count of Covid-19 deaths in the US, “we really are just seeing the tip of the iceberg and a lot of it has to do with the tests we have available,” Dr. Panagis Galiatsatos, a pulmonary and critical care physician on the front lines at Johns Hopkins Medicine in Baltimore, said Monday morning.
The most commonly used Covid-19 test requires a nasal swab, which has led to some false negatives, Galiatsatos said, explaining that he believes a blood test is a more accurate means of detecting the coronavirus. He also said that such blood tests are already performed to diagnose other viral infections such as HIV, cytomegalovirus and hepatitis C.

“A better test would be a blood test to measure any protein particles of the virus in your bloodstream, as well as an antibody response,” Galiatsatos said. “I do think what we are seeing is a tip of an iceberg, and the numerator and denominator are truly disconnected.”

“A better test would be a blood test to measure any protein particles of the virus in your bloodstream, as well as an antibody response,” Galiatsatos said. “I do think what we are seeing is a tip of an iceberg, and the numerator and denominator are truly disconnected.”

T
he CDC said Monday it is preparing to use a blood test to survey whether people in the United States have antibodies from the novel coronavirus, according to a statement from CDC spokesperson Kristen Nordlund.

The tests have already been used to monitor immune responses in several coronavirus contact investigations, and they’ll be deployed in coming weeks “to further identify individuals who, due to mild infection, may have not known they were infected with SARS-CoV-2 and to monitor immunity in recovered individuals,” Nordlund said.

Last week, The US Food and Drug Administration issued its first emergency use authorization for a coronavirus test that looks for antibodies in the blood. Unlike most coronavirus tests, which generally require a swab and look for signs of the virus itself, antibody tests look instead for the body’s response to a virus.

That type of test, called a serology test, would be able to identify past coronavirus infections, although it may be less effective at identifying recent ones.

The authorized test, from a manufacturer called Cellex Inc., requires blood to be collected through a vein, and the test itself can only be performed in a certified lab.

Because antibodies can take time to develop, the FDA has previously warned against using antibody tests to definitively diagnose coronavirus.

But in issuing what is known as an Emergency Use Authorization for the new test, the FDA signaled that the benefits of using the new blood test outweighed the risks.

‘There will be a lot of death’

International leaders have long suspected Covid-19 cases and deaths have been undercounted because so many possible cases remain untested.

Globally, “in countries with poor testing there may be a huge margin between confirmed cases and cases unidentified or not tested. It may be greater by several factors,” Dr. Bharat Pankhania, a senior clinical lecturer at the University of Exeter Medical School in the United Kingdom, said in a statement distributed by the UK-based Science Media Centre on Friday.
Pankhania is referring to the worldwide Covid-19 case count, which now exceeds 1 million.

“The new virus is doing what has been expected of it to do,” Pankhania said in the statement. “It is highly transmissible, infectious and disease-causing, thus we can expect continued major global disruption lasting for a very long time and it is better to say so now, rather than to say, it will all be over in a few months. There are no indicators which direct us to believe this pandemic is going to be over in a few months.”

In the US, President Donald Trump warned over the weekend that “there will be a lot of deaths” in the coming weeks.

“This will be probably the toughest week between this week and next week,” the President said at a White House briefing Saturday. “And there will be a lot of death, unfortunately. But a lot less death than if this wasn’t done,” he said, referring to certain mitigation tactics, such as social distancing and stay-at-home orders.