Coronavirus: What we know about the risks to school age children 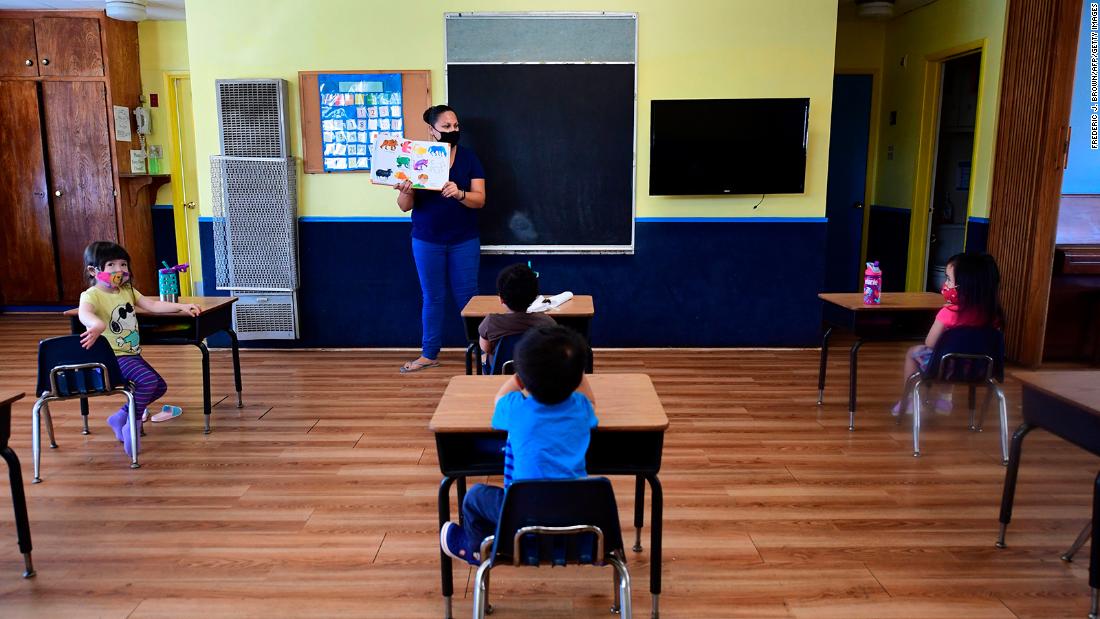 The Centers for Disease Control and Prevention has issued steps to keep children safe when schools reopen, including placing desks six feet apart, ensuring children wear face coverings and the closure of communal areas like dining rooms and playgrounds.

Children also test positive for coronavirus — there’s no question about that. And while they don’t get as sick as adults, they can still become dangerously ill, experts say.

In Florida, four children under age 17 have died of coronavirus complications. At the height of the pandemic, New York saw a growing number of children hospitalized with troubling symptoms linked to coronavirus. Several of them died. And in Texas, about 1,335 people have tested positive at child care facilities — about a third of them children.

“We shouldn’t be complacent and think that if a child contracts coronavirus all will be fine. Chances are all will be fine, but we just don’t know. This is particularly true for children who have underlying conditions, such as obesity or lung disease,” said Elizabeth Cohen, CNN’s senior medical correspondent.

But children are not the only concern when schools reopen. With nearly a third of teachers nationwide over age 50, they are more vulnerable to fatal infections. Asymptomatic transmission of the virus is a major concern — and the teachers can then pass the disease to more vulnerable people. A surge in schools can translate into a broader uptick a few weeks later.

“As any parent knows, children are little disease vectors. We don’t know precisely how effective children are at passing on the virus that causes Covid-19, but it’s a big concern,” Cohen said. “Also, while children don’t get as sick from Covid-19 as adults do, they can become seriously ill. We should not be lulled into thinking children are immune to Covid-19.”

Their symptoms can differ from adults

Children have been known to get a whole set of different symptoms — adding to the uncertainty of the virus that has killed more than 133,000 people nationwide. The varying symptoms make it especially harder to pinpoint.
In the United States and the United Kingdom, hospitalized children between ages 2 and 15 had a condition doctors called multisystem inflammatory syndrome. The symptoms are similar to toxic shock syndrome and Kawasaki disease, which cause inflammation in the walls of blood vessels. In rare cases, it can lead to deadly limitations in blood flow.

Many of the children tested positive for Covid-19 or had its antibodies but they didn’t necessarily have typical coronavirus symptoms such as respiratory distress. Their symptoms included a high temperature along with a rash, swollen neck glands, hands and feet, dry cracked lips and redness in both eyes.

Coronavirus causes a wide variety of symptoms in children, according to a study published in an American Academy of Pediatrics journal.

In that study, Dr. Rabia Agha and colleagues from Maimonides Children’s General Hospital in Brooklyn studied 22 children with coronavirus. They found most did not have classic symptoms. Fifteen patients had a fever and nine had respiratory symptoms. Two had seizures and two were entirely asymptomatic.

Research focused on children is limited

It’s been about six months since coronavirus started ravaging the world, and health officials are learning as they go along. And while numerous tests have been conducted to get more insight on the pathogen, not many have been focused on pediatric cases.

“Covid-19 is so new that we don’t have nearly enough research on it for adults, let alone for children,” Cohen said. “We can’t say definitively that the risks of them returning to school are minimal. Much more research still needs to be done.”

Unlike the flu, which has consistently shown that schools and children are major transmission instruments in communities, not as much is know on the coronavirus, said Dr. Robert Redfield of the Centers for Disease Control and Prevention.

“We really don’t have evidence that children are driving the transmission cycle of this,” he said.

However, he added, the ability of this virus to cause significant illness in children “is very, very — very limited.”

The US data is incomplete because the country has not been testing enough children to determine how widespread the virus is, said Deborah Birx, a member of the White House coronavirus task force.

“If you look across all of the tests that we’ve done … the portion that has been the lowest-tested portion is the under-10-year-olds,” Birx said. “So we’re putting into place other ways to get testing results from them and … try to really figure this out.”

Researchers are working on a saliva test that’ll make it easier to test children.

A majority of children under 18 don’t have symptoms, she said. And until health officials get more testing targeted to that age group, there’s no evidence on how many children die as a result of Covid-19.