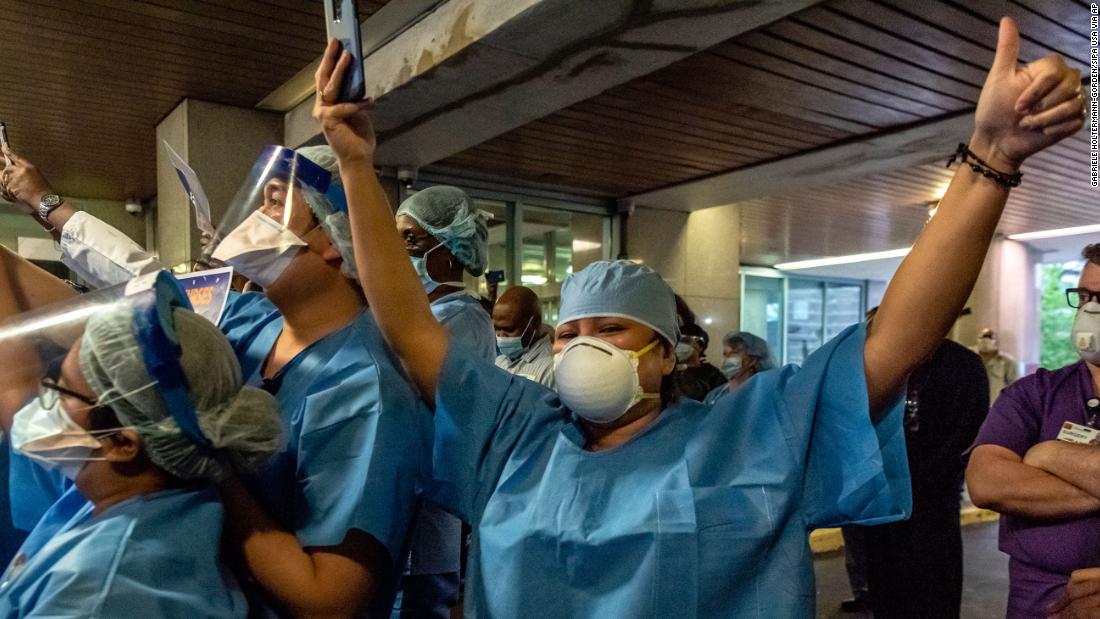 “The good news is we’re finally ahead of this virus,” New York Gov. Andrew Cuomo said at a coronavirus briefing Friday. “We haven’t killed the beast, but we are ahead of it.”

The state has been hardest hit by the pandemic. Of the more than 1,280,000 coronavirus cases and 77,179 deaths in the US, New York state has reported more than 330,000 cases and 26,243 deaths. But, Cuomo said Friday, both the death rate and the hospitalization rate for the state are going down.

Numbers are looking better in other corners of the US, too. Hawaii on Friday reported no confirmed cases of coronavirus for the first time since March 13. Meanwhile, Friday was the second day in a row, Orleans Parish in Louisiana reported no new coronavirus deaths.

Those bright spots come as swaths of the country continue to disagree on how to move forward with battling the deadly virus.

By Sunday, more than 45 states will have eased restrictions put in place to slow the spread of the virus, allowing parts of the economy to reopen.
More than two-thirds of Americans worry that their respective states are reopening too quickly, according to a new poll from the Pew Research Center. By contrast, protestors have taken to the streets in some states demanding that businesses put people back to work quicker.

Experts have said reopening too soon could lead to another wave of the pandemic. It could be weeks before the US sees the impact of the reopenings.

Infections from the White House to prisons

As states continue to navigate the reopening process, the White House is responding to two cases of coronavirus.

One of President Donald Trump’s personal valets, a member of the US Navy, tested positive for coronavirus, CNN learned Thursday. Valets assist the President and first family and are responsible for the President’s food and beverages.

The President and Vice President have since tested negative, deputy White House press secretary Hogan Gidley said in a statement.

On Friday, Vice President Mike Pence’s press secretary, Katie Miller, tested positive for the virus, Trump confirmed. He said that Miller has not come into contact with him but noted that she has been in contact with Pence.
Elsewhere, federal and state prisons have had thousands of inmates test positive for the virus. The facilities that often are limited in the abilities to socially distance have been the site of some state’s biggest outbreaks.

In Arkansas, more than 1,000 inmates have tested positive — with 876 from a single correctional facility, according to Dr. Nate Smith, the Director of the Arkansas Department of Health. For Ohio, 20% of the state’s infections are attributed to people behind bars.

Throughout the pandemic’s hold on the US, nursing homes also have been especially vulnerable. The large populations in close quarters as well as the virus’s severity on older adults has led to large numbers of infections.

Call for parents’ vigilance after death of 5-year-old

Parents are now also on alert after the death of a child in New York City raised questions about whether data from Chinese health officials showing that the virus was less common and less severe in children is true.

A 5-year-old boy died Thursday from coronavirus-related complications, Cuomo said in a news conference on Friday.

“This would be really painful news and would open up an entirely different chapter, because I can’t tell you how many people I spoke to who took peace and solace in the fact that children were not getting infected,” Cuomo said. “We thought children could be vehicles of transmission … but we didn’t think children would suffer from it.”

The governor did not name the child but said the state’s health department is investigating other cases with similar circumstances.

The death comes the same week state officials sent an advisory to health care providers saying that dozens of children in New York have been hospitalized with a condition doctors described as “pediatric multisystem inflammatory syndrome.”

Most of them tested positive for coronavirus or had positive antibody tests.

“We were led to believe that the good news about this virus was that it doesn’t affect children … now we have a new issue that we’re looking at,” Cuomo said.

The coronavirus pandemic has put Americans out of work at historic levels.

The US economy lost 20.5 million jobs in April, the Bureau of Labor Statistics said Friday. Many economies began to shut down to curb the spread of the virus in March, which saw 870,000 jobs cut.

The layoffs were more than double the jobs lost during the 2008 financial crisis. In just two months, the pandemic wiped out the progress of years of recovery for the nation.

Unemployment soared as a result, reaching 14.7% in April. That is the highest level since the BLS began recording the monthly rate in 1948.

Americans last saw such severe unemployment during the Great Depression. At its peak in 1933, the unemployment rate was at 24.9%, according to historical annual estimates from BLS.