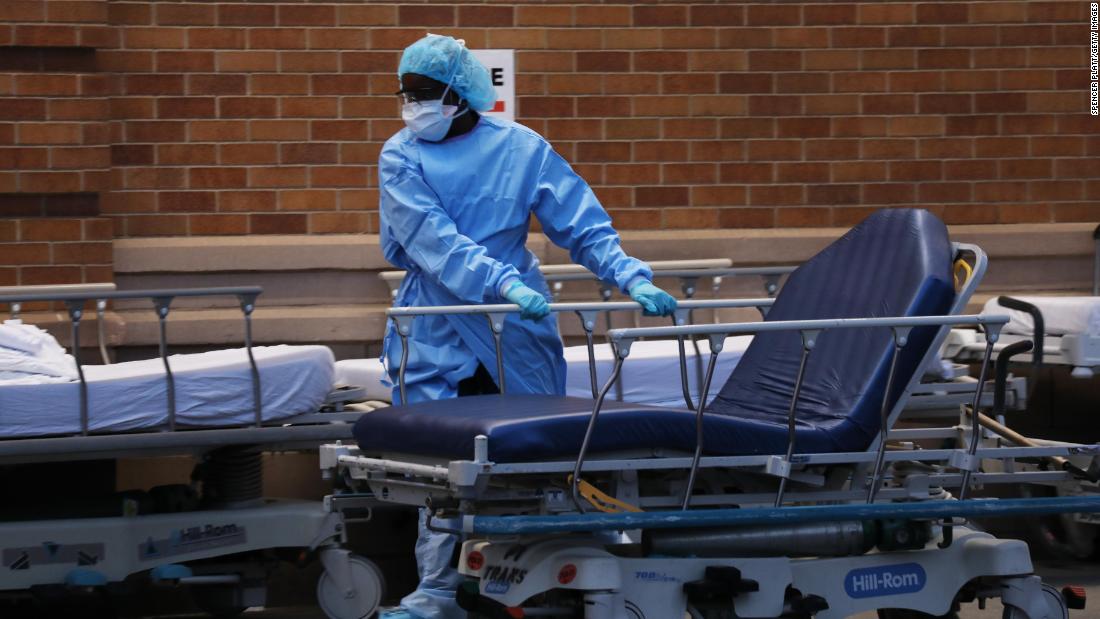 “Our concern is that many people are more afraid of going to an ER than they are of having a stroke. This is a critical error because stroke treatments can be highly effective and the chance of being infected in an ER is minute,” Albers said. “It is very important that patients with symptoms of stroke call 911. If the stroke is causing disabling symptoms there’s a huge advantage to getting it treated.”

Many heart patients in particular fear exposure to the coronavirus since underlying health conditions, including heart conditions and high blood pressure, can increase the risk of severe illness or even death from Covid-19.
In early May, the American Heart Association urged people to call 911 if they experience any chest pain or heart symptoms, even amid the coronavirus pandemic.
In that statement, the association referenced data from the ESO system that first responders use across the United States showing that there has been a decline of 13.1% in 911 responses for chest pain between January 1 and May 4. It also showed a 7% decrease in 911 responses for stroke symptoms. The overall decrease in 911 calls was 12.4%, averaged from January 1 through May 4, according to the data.

As fewer people call 911 for heart attack or stroke symptoms during the pandemic, unfortunately, their delay in seeking care can lead to long-term health consequences, serious disabilities or even death, said Michele Bolles, Vice President for Quality and Health Information Technology at the American Heart Association and leads the national Get With The Guidelines program.

“In the case of a stroke, the longer you wait, the more brain damage and brain tissue is lost, and for a person experiencing a heart attack, the same is true — time equals heart muscle — and in those two incidences, time is critical. Every minute counts,” Bolles said.

“With people driving family members to the hospital, it’s possible that you may not make it. You could maybe pass out, you could crash your car. There are a lot of things that could happen when someone tries to drive themselves to seek emergency care,” she added. “The bottom line is to know the signs and symptoms of a heart attack and stroke and to call 911 as quickly as possible.”

Bev Pohlit, a 59-year-old mother of two sons in Sinking Spring, Pennsylvania, knows the dangers of waiting too long to seek medical care all too well.

Had Pohlit waited any longer to seek care at the hospital for her severe asthma symptoms, she worries she could have had a heart attack or respiratory arrest.

It was in early March when Pohlit experienced persistent tightness in her chest, but she avoided going to the hospital because she feared she would catch the coronavirus. As her symptoms continued, she went to a local urgent care instead — but the medical team there told her that she really needed to go to the emergency room.

“I was so scared,” said Pohlit, who has had one heart attack.

Pohlit drove to the hospital, which she said was only about five miles away. During that drive, tears streamed down her cheeks.

“I was flipping out,” Pohlit said. “I called my husband and I said ‘I’m on my way to the ER.’ I said,’You don’t need to come.’ I said stay at work and I’m going to be OK, because I didn’t want him to go into that environment.”

When Pohlit arrived at the hospital, she told staff that she was a heart patient who is also asthmatic — and that she had concerns about being exposed to the coronavirus.

“They immediately put me aside, not with the general public,” Pohlit said, adding that her blood pressure rose and her heartbeat increased due to her stress.

While in the hospital’s triage unit, Pohlit said that there was a curtain between herself and another patient who was coughing. She feared this patient could be sick with Covid-19 and was allowed to wait in the hallway until she was admitted to the emergency department.

Pohlit then was evaluated for her symptoms and after being admitted, she said that her fear faded away.

“They were very honest with all of my questions and telling me that they would not put me in an area that would expose me to Covid,” Pohlit said. “I felt safe the whole time.”

Doctors at the hospital diagnosed a severe asthma attack.

“I was thankful that my asthmatic attack didn’t cause me to have a heart attack,” Pohlit said.

“You can’t tell the difference between the two because a severe asthmatic attack gives you tightness in the chest, shortness of breath,” she said, adding that women tend to have different heart attack symptoms than men.
Symptoms of a heart attack include chest pain, shortness of breath or nausea, and women are more likely than men to have additional symptoms such as unexplained tiredness and nausea or vomiting. About every 40 seconds someone in the United States has a heart attack, according to the US Centers for Disease Control and Prevention.

While in the hospital, Pohlit received medication for her symptoms and, once stable, she was allowed to go home.

“When you have asthma and you’re not getting the proper airflow, that could cause a lot of other medical issues and one is a heart attack. That is the reason I went to the hospital,” she said.

Pohlit added that if she had called 911 instead of taking herself to the hospital, even more steps could have been taken to ensure her exposure to the coronavirus was limited — and she hopes that other patients can learn from her experience.

“I came in through the front door. If you call 911, they bring you in the safe way,” Pohlit said. “Your safety net is to call 911 because they have the equipment and technicians right there with you to help you get into the hospital.”

‘Some patients … were not seeking medical care’

As the coronavirus pandemic continues, researchers are now learning more about how fears around Covid-19 are leading to rapid decreases in heart-related admissions to hospitals.

The pre-print paper, posted on Monday to the online health sciences server medRxiv, included data on hospitalizations at 65 hospitals in the United States between February and March in 2018 through 2020.

Neurologist Dr. Adam de Havenon of the University of Utah and colleagues across the country took a close look at patients’ diagnoses and billing codes. They included 51,246 strokes and 36,551 acute coronary syndrome cases, or conditions associated with sudden reduced blood flow to the heart, among other diagnoses.

“Because the most likely explanation is that some patients with stroke and ACS were not seeking medical care, public health messaging should include reminders that emergent care for acute cardiovascular and neurologic symptoms should not be postponed during a pandemic,” de Havenon and colleagues wrote.

In the New England Journal of Medicine letter published on Friday, researchers from the Washington University School of Medicine in St. Louis and Stanford University in California found a 39% drop in the number of patients getting brain scans for stroke symptoms.

“We were very surprised to see that many people of all ages, and even those with severe strokes, were not presenting to the hospital for evaluation and treatment. Even in states with few Covid cases, patients were hesitant to be seen in ERs,” Albers said.

“Not only are patients afraid to go in but some physicians have been hesitant to send patients to the ER. Even paramedics may be concerned.”