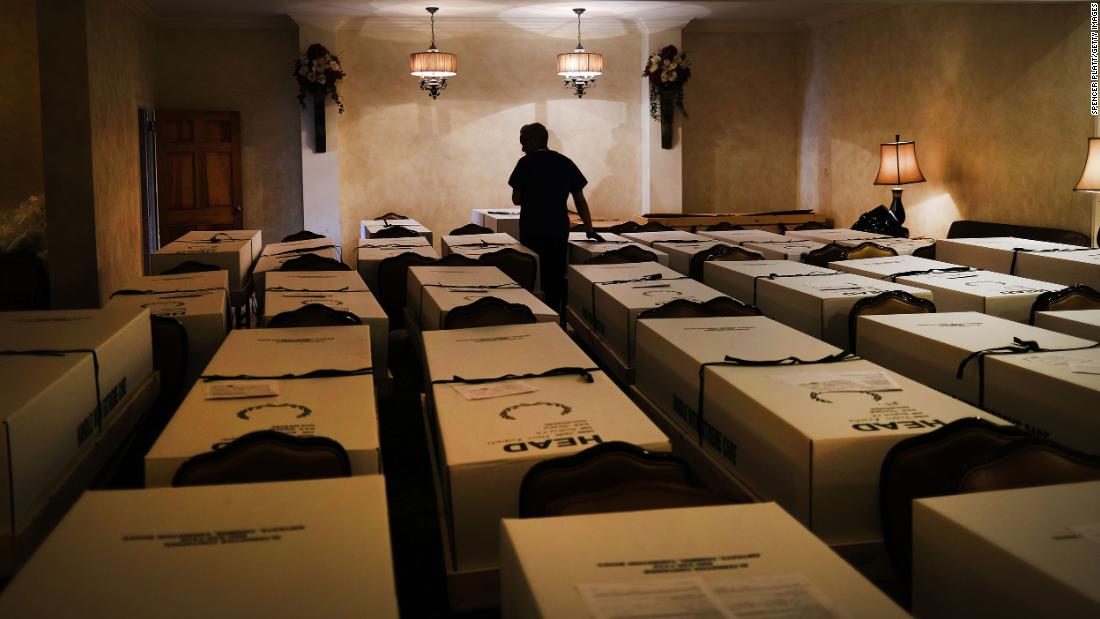 With social distancing rules keeping families apart, many of the sick died alone in hospital rooms as loved ones were forced to say goodbye through phone screens.

Others have died at home, too sick or too scared to go to the hospital for coronavirus tests. Their stories never made it to the roster of deaths, which means the tolls could be higher.

Families have lost fathers, mothers, siblings, grandparents and even children. America has lost the best of humanity: an ER doctor who risked his life trying to save others, a 36-year-old principal who helped troubled students grow produce for the needy. A Holocaust survivor who saved dozens of families from genocide was also among the virus’ victims.

Six feet of distance may not be enough, experts warn

Health officials have struggled to make sense of the highly contagious and poorly understood disease even as coronavirus circulates in the United States, where nearly 1.7 million have tested positive.

And experts are still learning new things about its spread.

For months, public health officials have urged people to stay six feet apart to slow its spread through respiratory droplets. But three experts are warning that six feet may not be enough — and are asking the world to take airborne transmission of the virus seriously.

In a commentary published in the journal Science, the experts highlighted the importance of masks and regular, widespread testing.

They pointed to places such as Singapore, Hong Kong and Taiwan, where mask wearing is universal and the virus has been controlled.

“Evidence suggests that [the novel coronavirus] is silently spreading in aerosols exhaled by highly contagious infected individuals with no symptoms,” wrote Chia Wang of National Sun Yat-sen University in Taiwan, and Kimberly Prather and Dr. Robert Schooley of the University of California, San Diego.

“Increasing evidence for [the coronavirus] suggests the six-foot WHO recommendation is likely not enough under many indoor conditions where aerosols can remain airborne for hours, accumulate over time and follow air flows over distances farther than six feet,” they wrote.

The three experts are specialists in chemistry and infectious diseases. They said aerosols from breathing and speaking can accumulate and remain infectious in indoor air for hours, and can be easily inhaled into the lungs.

That makes wearing masks all the more essential, they said, even when people are keeping their distance.

The US Centers for Disease Control and Prevention has addressed the issue of respiratory droplets produced when a person coughs or sneezes. It has said they “can land in the mouths or noses of people who are nearby or possibly be inhaled into the lungs.”

Spread is more likely when people are in close contact with one another, or “within about 6 feet,” the CDC says. That’s because respiratory droplets are relatively large and fall to the ground — unlike aerosols, which are smaller and more likely to stay in the air longer.

While health officials have focused on droplets, the three experts said “a large proportion” of the spread of coronavirus disease appears to be occurring through airborne transmission of aerosols produced by asymptomatic people during breathing and speaking.

“For society to resume, measures designed to reduce aerosol transmission must be implemented, including universal masking and regular, widespread testing to identify and isolate infected asymptomatic individuals,” they said.

Change of behavior, not a vaccine, is what’s needed, experts says

The US did not have to lose 100,0000 people in the first five months of the coronavirus pandemic, according to an expert on viruses and biotechnology.

“We already know how to control the virus in a big population. It can be done through human behavior,” the former professor at Harvard Medical School told CNN’s Anderson Cooper. “It didn’t have to happen if we had been prepared.”

Experts had worked with the US Department of Defense and Homeland Security to plan and protect the country from bioterrorism, as well as from threats like the coronavirus.

“It was totally predictable that another coronavirus was on its way,” Haseltine said. “The mechanism exists, the stockpile, the drugs,” he said. “There was a hole in our safety net.”

China, New Zealand, and Australia have effectively dealt with coronavirus outbreaks, bringing their cases down through testing, contact tracing and isolation, Haseltine said.

Those countries did it without the benefit of a vaccine or effective drug. The key to their success was behavior change.

How states are doing on infections

While the nation tries to keep infection rates down, some states are doing better than others.

Illinois appears to be entering a “downward trend,” with the week ending May 16 being its first with a lower number of coronavirus deaths than the week before.

Washington, DC will move Friday into Phase 1 of reopening, Mayor Muriel Bowser said, after it had a 14-day decline in cases of coronavirus community spread.

But other regions did not fare as well. As of Wednesday, there were 14 states in which the number of cases was still trending upward.

Mississippi Gov. Tate Reeves warned residents to stay vigilant because the state is still seeing a steady number of cases.

California became the fourth state Wednesday with more than 100,000 cases. New York, New Jersey and Illinois were the first three to the milestone.