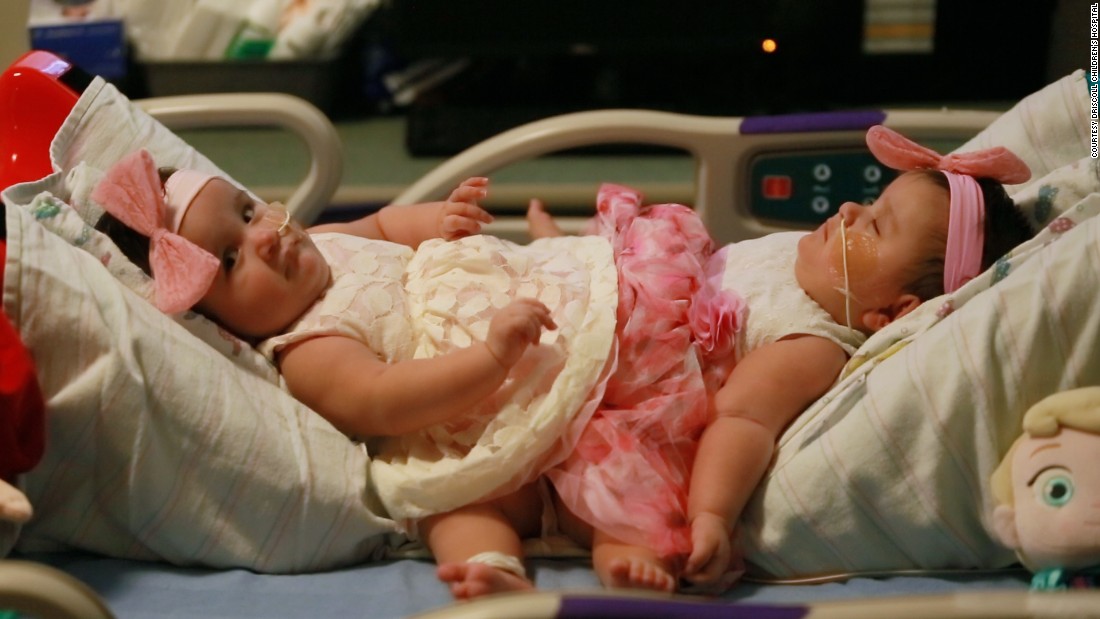 Conjoined twins are physically connected to one another at some point on their bodies.

About 70% of conjoined twins are female.

Conjoined twins are identical – they are the same sex.

Scientists believe that conjoined twins develop from a single fertilized egg that fails to separate completely as it divides.

The term “Siamese twins” originated with Eng and Chang Bunker, a set of conjoined twins who were born in Siam (now Thailand) in 1811. They lived to age 63 and appeared in traveling exhibitions. Chang and Eng both married and fathered a total of 21 children between them.

Lea and Tabea Block
Born August 9, 2003, in Lemgo, Germany, to Peter and Nelly Block. They are joined at the head.

Jade and Erin Buckles
Born February 26, 2004, to Melissa and Kevin Buckles at National Naval Medical Center in Bethesda, Maryland. They share a liver.

Tatiana and Anastasia Dogaru
Born January 13, 2004, in Rome to Romanian parents Claudia and Alin Dogaru. They are connected at the head.

June 7, 2007 – Scheduled surgery to separate the girls is halted after doctors notice brain swelling in one of the girls.

August 2007 – Doctors at University Hospital’s Rainbow Babies & Children’s Hospital in Cleveland announce that they will not proceed with separation of the girls because the surgery is too risky.

Abbigail and Isabelle Carlsen
Born November 29, 2005, in Fargo, North Dakota, to Amy and Jesse Carlsen. They are joined at the abdomen and chest.

May 12, 2006 – A team of 30 people, including 18 surgeons from various specialties at the Mayo Clinic in Rochester, Minnesota, perform a successful operation to separate the girls.

Regina and Renata Salinas Fierros
Born August 2, 2005, in Los Angeles to Sonia Fierros and Federico Salinas. Born facing each other and joined from the lower chest to the pelvis, they are fused in several places including the liver and genitals, and they share a large intestine. Regina is born with one kidney.

June 14, 2006 – The twins are separated during a day-long surgery at Children’s Hospital Los Angeles.

Abygail and Madysen Fitterer
Born August 8, 2006, to Stacy and Suzy Fitterer from Bismarck, North Dakota. They are born joined at the abdomen and share a liver.

Preslee Faith and Kylee Hope Wells
Born October 25, 2008, in Oklahoma City to Stevie Stewart and Kylie Wells. They are attached at the chest and are believed to be the first Native American conjoined twins.

January 19, 2009 – Separated at Children’s Hospital at OU Medical Center in Oklahoma City. Both survive but are listed in critical condition after the surgery.

Arthur and Heitor Rocha Brandao
Born April 2009 in Bahia, Brazil, to Eliane and Delson Rocha. They are joined at the hip and share a bladder, intestines, liver and genitals. The twins only have three legs between them.

Angelica and Angelina Sabuco
Born August 2009 in the Philippines to Fidel and Ginady Sabuco. They are joined at the chest and abdomen.

Hassan and Hussein Benhaffaf
Born December 2, 2009, in London to Angie and Azzedine Benhaffaf from East Cork, Ireland. They are attached at the chest but share no major organs.

Maria and Teresa Tapia
Born April 8, 2010, in the Dominican Republic to Lisandra Sanatis and Marino Tapia. They are joined at the lower chest and abdomen and share a liver, pancreatic glands, and part of their small intestine.

Joshua and Jacob Spates
Born January 24, 2011, in Memphis, Tennessee, to Adrienne Spates. They are joined back to back at the pelvis and lower spine, each with separate hearts, heads and limbs.

October 2013 – Jacob Spates passes away. The cause of his death is not released.

Rital and Ritag Gaboura
Born September 22, 2010, in Khartoum, Sudan, to Abdelmajeed and Enas Gaboura. They are joined at the head.

August 15, 2011 – Are successfully separated after a four-stage operation. Two operations took place in May, one in July and the final operation in August.

Allison June and Amelia Lee Tucker
Born March 1, 2012, to Shellie and Greg Tucker. They are attached at the lower chest and abdomen and share their chest wall, diaphragm, pericardium and liver.

November 7, 2012 – Are successfully separated after a seven-hour surgery at Children’s Hospital Philadelphia.

A’zhari and A’zhiah Lawrence
Born October 10, 2012, in Virginia to Nachell Jones and Carlos Lawrence. They are joined from the chest to the abdomen and have a conjoined liver.

October 25, 2012 – An emergency surgery is performed to separate their liver.

Emmett and Owen Ezell
Born July 15, 2013, in Dallas to Jenni and Dave Ezell. They are joined at the liver and the intestine.

Knatalye Hope and Adeline Faith Mata
Born April 11, 2014, in Houston to Elysse and John Matta. They are joined at the chest, sharing a liver, heart lining, diaphragm, intestines and colon.

Erika and Eva Sandoval
Born August 10, 2014, in California to Aida and Arturo Sandoval. They are joined at the lower chest and upper abdomen and share a liver, bladder, two kidneys and three legs.

December 6-7, 2016 – Are successfully separated after 17 hours of surgery at Lucile Packard Children’s Hospital Stanford in California.

Acen and Apio Akello
Born September 23, 2014, in Uganda to Ester Akello. They are joined at the hip and pelvis.

September 3, 2015 – After more than 30 medical specialists help to separate the girls’ spinal cord, the 16-hour surgery at Nationwide Children’s Hospital in Ohio is successful. The medical specialists used 3-D printing to create anatomies similar to the girls to prepare for the surgery.

Carter and Conner Mirabal
Born December 12, 2014, in Jacksonville, Florida, to Michelle Brantley and Bryan Mirabal. They are joined at the sternum and abdomen and share a liver and part of their small intestines.
May 7, 2015 – Are successfully separated after 12 hours of surgery at Wolfson Children’s Hospital in Florida.

April 12, 2016 – Scarlett and Ximena are separated during a 12-hour procedure at the Driscoll Children’s Hospital in Texas.

Anias and Jadon McDonald
Born on September 9, 2015, in Chicago to Nicole and Christian McDonald. They are joined at the head.

October 13-14, 2016 – Anias and Jadon are successfully separated after 27 hours of surgery at the Children’s Hospital at Montefiore Medical Center in New York.
November 8, 2016 – The lead surgeon tells CNN that the twins are recovering “right on target, if not ahead of schedule.”

Dawa and Nima Pelden
Born on July 13, 2017, in Bhutan to Bhumchu Zangmo. They are joined at the abdomen.

October 10, 2018 – Surgery is postponed in order to give the girls additional nutritional support.

Safa and Marwa Ullah
Born January 7, 2017, in Pakistan to Zainab Bibi. They are joined at the head.

February 11, 2019 – Safa and Marwa are successfully separated after 50 hours of surgery, that took place over a four month period, at London’s Great Ormond Street Hospital.