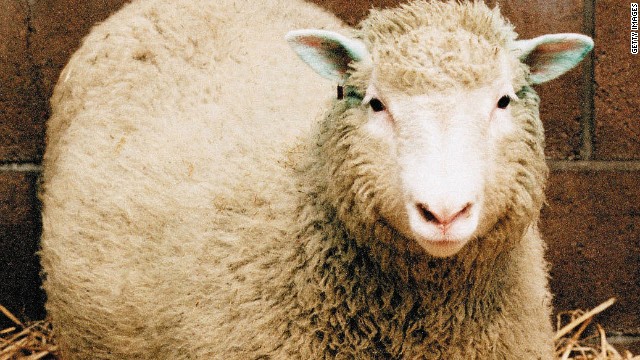 Reproductive Cloning is the process of making a full living copy of an organism. Reproductive cloning of animals transplants nuclei from body cells into eggs that have had their nucleus removed. That egg is then stimulated to divide using an electrical charge and is implanted into the uterus of a female.

Therapeutic Cloning is the process where nuclear transplantation of a patient’s own cells makes an oocyte from which immune-compatible cells (especially stem cells) can be derived for transplant. These cells are stimulated to divide and are grown in a Petri dish rather than in the uterus.

Gene Cloning creates copies of genes or DNA fragments. Gene cloning is the most common form of cloning performed by researchers at the National Human Genome Research Institute. Genes are cloned for scientists to study in a laboratory setting.

1952 – Scientists demonstrate they can remove the nucleus from a frog’s egg, replace it with the nucleus of an embryonic frog cell, and get the egg to develop into a tadpole.

1963 – Chinese scientists reportedly create the first cloned fish by transferring the DNA from a male carp into the egg of a female carp.

1984 – A researcher in Britain claims that he has cloned the first mammal, a lamb that was produced via the nuclear transfer of sheep embryo cells.

February 22, 1997 – Scientists reveal Dolly the sheep, the first mammal to be cloned from cells of an adult animal. She was actually born on July 5, 1996.

2000 – Pigs and a goat are reportedly cloned from adult cells.

2002 – Rabbits and a kitten are reportedly cloned from adult cells.

December 27, 2002 – Clonaid claims to produce first human clone, a baby girl, Eve. The company declines to provide proof that Eve is a clone or even that she exists.
January 23, 2003 – Clonaid claims to have cloned the first baby boy. The baby was allegedly cloned from tissue taken from the Japanese couple’s comatose 2-year-old boy, who was killed in an accident in 2001. Clonaid again declined to provide physical evidence of the cloning.
February 14, 2003 – The Roslin Institute confirms that Dolly, the world’s first cloned mammal, was euthanized after being diagnosed with progressive lung disease. She was 6 years old.

August 6, 2003 – Scientists at the Laboratory of Reproductive Technology in Cremona, Italy, say they have created the world’s first cloned horse, Prometea, from an adult cell taken from the horse who gave birth to her.

September 26, 2003 – The journal Science reports that French scientists at the National Institute of Agricultural Research at Joy en Josas, France, have cloned rats for the first time.

May 2009 – Clone of two-time quarter horse world champion Tailor Fit is born, one of several cloned horses born that year.

September 2011 – At South Korea’s Incheon Airport, seven “super clone” sniffer-dogs are dispatched to detect contraband luggage. They are all golden Labrador Retrievers that are genetically identical to Chase, who was the top drug detention canine until he retired in 2007.
May 15, 2013 – Oregon Health & Science University researchers report in the journal Cell that they have successfully reprogrammed human skin cells back to their embryonic state.
April 2014 – For the first time, cloning technologies are used to generate stem cells that are genetically matched to adult patients. Scientists put the nucleus of an adult skin cell inside an egg and the reconstructed egg went through the initial stages of embryonic development, according to research published in the journal Cell Stem Cell.
January 24, 2018 – For the first time, scientists say they created cloned primates using the same complicated cloning technique that made Dolly the sheep in 1996. Shanghai scientists created two genetically identical long-tailed macaques. The research is published in the journal Cell.