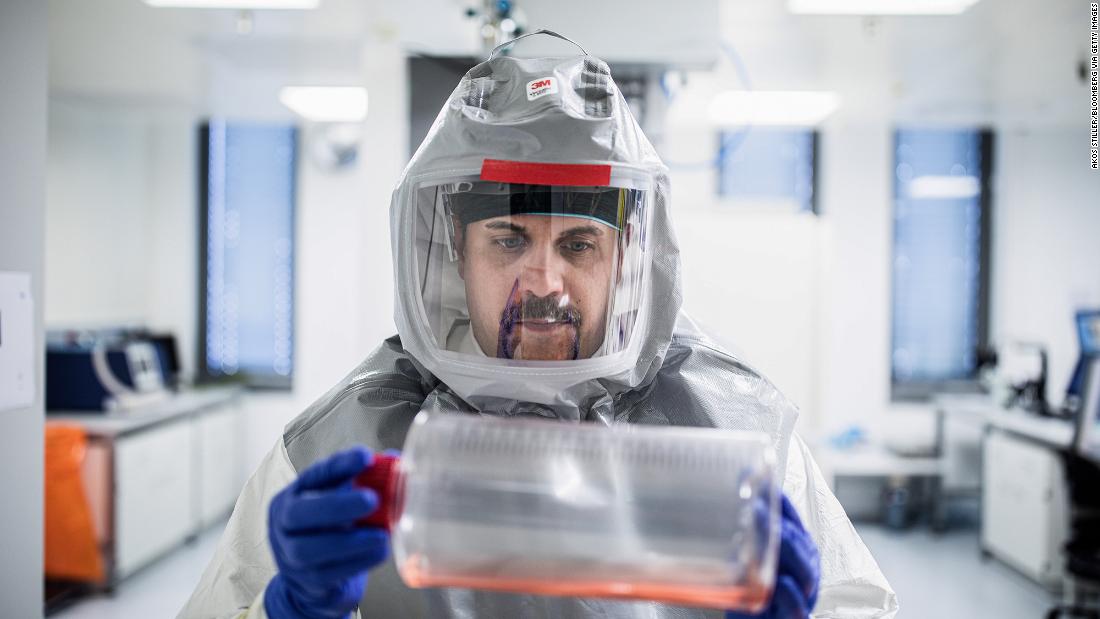 “There’s a lot of incentive for any corporation to be the first to produce an effective vaccine,” epidemiologist and public health expert Dr. Abdul El-Sayed told CNN’s Wolf Blitzer Sunday. “To see a CEO get out ahead of the science here I think is something we should all take with a grain of salt.”

El-Sayed’s comments came as Pfizer CEO Albert Bourla told CBS’ “Face the Nation” on Sunday that there was a “quite good chance” that the team testing its potential vaccine will know whether it works by the end of October.

Anne Rimoin, an epidemiology professor at the UCLA Fielding School of Public Health, also expressed skepticism at that timeline.

“It’s all really speculation at this point,” Rimoin told Blitzer Sunday. “I want to see the data. Show me the data.”

When asked whether people would have to wait until 2021 to actually get the vaccine, Bourla said that he didn’t know how long it would take for regulators to approve it.

“We have a good chance that we will know if the product works by the end of October. Then, of course, it is (the) regulator’s job to issue (a) license or not.”

The US Food and Drug Administration, the agency responsible for regulating vaccines in the US, has been under fire after several missteps during the pandemic, Dr. Jeremy Faust, an emergency physician at Brigham and Women’s Hospital, told Blitzer.

“People may not pay attention or they may be scared because there has been so much credibility that has been squandered,” he said. “That’s why you always tell the truth even if it doesn’t win the news cycle.”

A pledge for vaccine safety

Around the world, there are 35 vaccines in human trials. Eight of those are in late-stage, large clinical trials as of Friday, the World Health Organization said, including candidates from Pfizer, AstraZeneca and the University of Oxford.

But the urgency to develop a vaccine for the virus that has infected more than 6.5 million and resulted in 194,079 deaths has led to concerns that the end result won’t be safe.

Two of the vaccines in the works have had to pause their trials.

The research team at the University of Oxford announced its trial would resume in the United Kingdom after being halted last week following an unexplained illness in one of the volunteers — a step experts said is not unprecedented.

“In large trials such as this, it is expected that some participants will become unwell and every case must be carefully evaluated to ensure careful assessment of safety,” Oxford said in a statement.

On Wednesday, AstraZeneca revealed that its trial had been paused twice because of adverse events.

Though it isn’t unheard of, experts interviewed by CNN said it is uncommon for a Phase 3 trial to be paused twice from adverse events.

“It’s unfortunate that it happened. Hopefully they’ll work it out and be able to proceed along with the remainder of the trial, but you don’t know. They need to investigate it further,” said Dr. Anthony Fauci , director of the National Institute of Allergy and Infectious Diseases.

Ensuring the vaccine works for the most vulnerable

Even though preliminary results show signs the vaccines under development may work, Dr. Celine Gounder told Blitzer that researchers won’t really know how effective the products are until they are tested on a wider range of populations.

There has not been enough representation of the very elderly, children, pregnant women and people with immunosuppressant conditions like HIV or cancer in the testing, she said.

“That matters because their immune system is not going to respond to this vaccine in the same way,” said the internist and infectious disease specialist.

On Saturday, the American pharmaceutical company Pfizer and its German partner BioNTech announced their proposal to expand Phase 3 clinical trials to include 44,000 participants and more diverse patient populations, including people as young as 16.

That’s up from the initial plan of 30,000 participants, a benchmark they plan to meet next week, according to a news release.

The proposal, which would need approval by the Food and Drug Administration, would allow the companies to collect more data on the safety and efficacy of the vaccine candidate while diversifying the pool of participants.

“I think we should strive to have as more diverse population as possible,” Bourla told CBS Sunday, stressing the importance of having a diverse group of volunteers given the heightened impact Covid-19 has had on communities of color.

“But right now we are not bad. Actually, we have a population that globally only 60% are Caucasians, 40%, approximately, minorities,” he said.

University students asked to do their part

Meanwhile, as students return to campus, officials are urging them to do their part to reduce the spread of the virus by quarantining and practicing social distancing.

As a preventive measure, Ohio State University plans to cancel Spring Break in 2021 to reduce the exposure of its students, staff and faculty, the university said Sunday, saying that it allow students two days off from classes instead.

The university says this will “keep our community together throughout the semester and reduce travel-related exposures.”

“While there were many adjustments to our plans over the summer, we hope that our experience this semester will allow for a smoother and more predictable plan heading into spring semester,” Executive Vice President and Provost Bruce A. McPherson said in an email to students and faculty.

“MSU is committed to doing everything we can to prevent the spread of COVID-19,” MSU physician David Weismantel said. “The safety of our entire community is a priority and we all have a role to play in preventing the spread of the virus.”