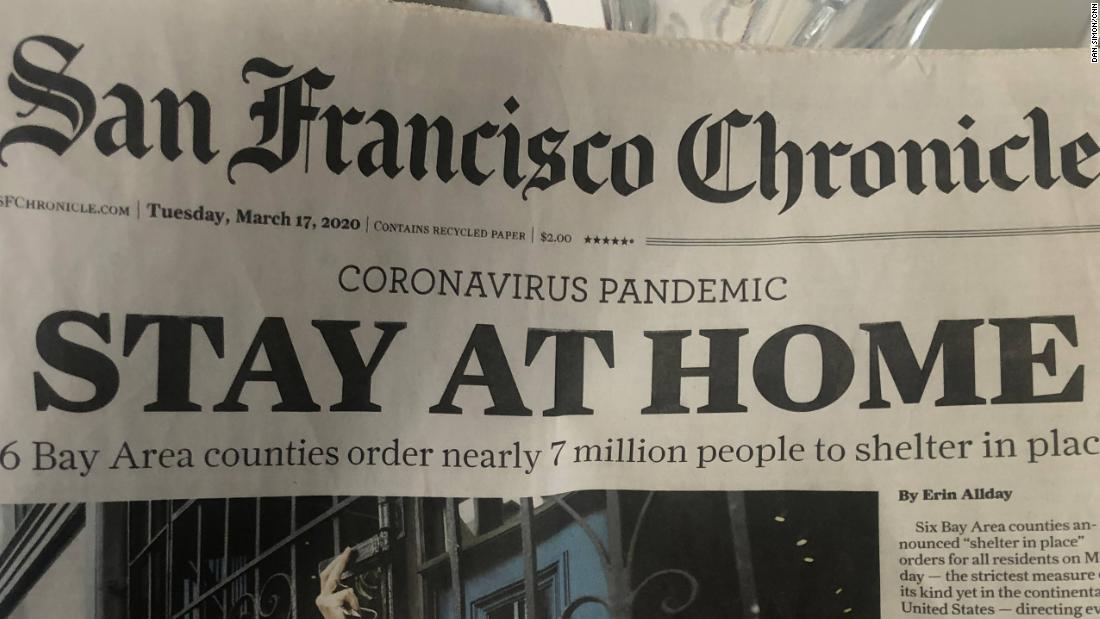 “When you put in these social distancing measures, they do seem to work,” said study coauthor Kathleen Ethier, leader of the CDC’s community mitigation task force for the Covid-19 response.

While there are early indications that social distancing has helped slow the spread of the coronavirus, experts warn that if people don’t continue to adhere to the orders, the virus could surge again in some areas.

The CDC report looked at data in New York City, Seattle, New Orleans and San Francisco, four cities with substantial numbers of coronavirus patients early in the outbreak that mandated stay at home orders in mid- to late-March.

It found that, in all four places, close to 80% of people were leaving home on February 26. And by April 1, that declined between 20 percentage points and 40 percentage points in each city, with mobility decreasing each time a new social distancing order was issued, starting with bans on mass gatherings, and then later restaurant and school closures and finally stay at home orders.

“They didn’t leave their home at any point for any reason. They didn’t go outside. That’s significant,” Ethier said.

The CDC tracked mobility by looking at whether devices such as cell phones were brought more than 500 feet from the places they usually spend the night. Using anonymized publicly available data from a company called SafeGraph, the CDC looked at phones, tablets and watches belonging to between 3.6% and 6.4% of the population in each city.

That means anyone who just took a walk during the day would be counted as not staying at home.

The report noted that more research would be needed to determine whether the stay at home policies had an impact on the spread of the virus, but already there have been some indicators that they’ve helped.

The city has not seen the expected surge of coronavirus patients, and hospitals have not had difficulty coping with large numbers of emergency room visits or stays in the intensive care unit.

“If I had to attribute it to one thing, it has to be [San Francisco] Mayor London Breed’s foresight in calling state of emergency early, getting people to shelter in place early, and really just wonderful messaging of social distancing,” said Dr. Jahan Fahimi, an emergency room physician at University of California San Francisco.

The rise in the numbers of coronavirus patients in New York is starting to slow, and officials attribute that in part to the state’s stay at home order, which was issued March 22.

“We’re seeing a rather dramatic decrease in the need for hospitalizations,” said Dr. Anthony Fauci, director of the National Institute for Allergies and Infectious Diseases. “That means that what we are doing is working and therefore we need to continue doing it.”

CDC Director Dr. Robert Redfield said the most powerful weapon against coronavirus is social distancing rules, which calls for people stay at least 6 feet apart from each other.

So when can we all get out of the house?

President Donald Trump’s aides have begun intensive discussions on a plan to reopen the US economy as early as the start of May, according to people familiar with the deliberations.
“Some areas are much less affected than others,” Trump said Wednesday at a White House briefing. “But it would be nice to be able to open with a big bang and open up our country or certainly most of our country.”

But experts — including those whom the White House has consulted — are more cautious.

On Sunday, Fauci said it was difficult to predict, but re-opening the economy “could probably start at least in some ways maybe next month.”

He added that the nation could not at one time drop the various restrictions put in place or there is an “extraordinary risk” of another major outbreak.

“We are hoping that by the end of the month we can look around and say, OK, is there any element here that we can safely and cautiously start pulling back on? If so, do it. If not, then just continue to hunker down,” Fauci said.

To help see where the outbreak is headed, the White House has consulted with various groups that are doing disease modelling, including the Institute for Health Metrics and Evaluation at the University of Washington.

“Some states, it’s possible in May,” Dr. Christopher Murray, director of the institute, told CBS Face The Nation on Sunday. “But in other states it’s going to be very, very unlikely that that would not lead to an immediately resurgence.”

In the decision about when to reopen the country, public health concerns might conflict with economic concerns.

“It’s an agonizing debate that is going on at the city, state, and national level for which there are no good answers. There are no good numbers to indicate when to start, in a staged, graduated fashion, easing up on social distancing,” said Dr. William Schaffner, an infectious disease expert and longtime adviser to the CDC. “But I do think if we ease up now, it would spike back up again before the summer. That clearly would happen.”