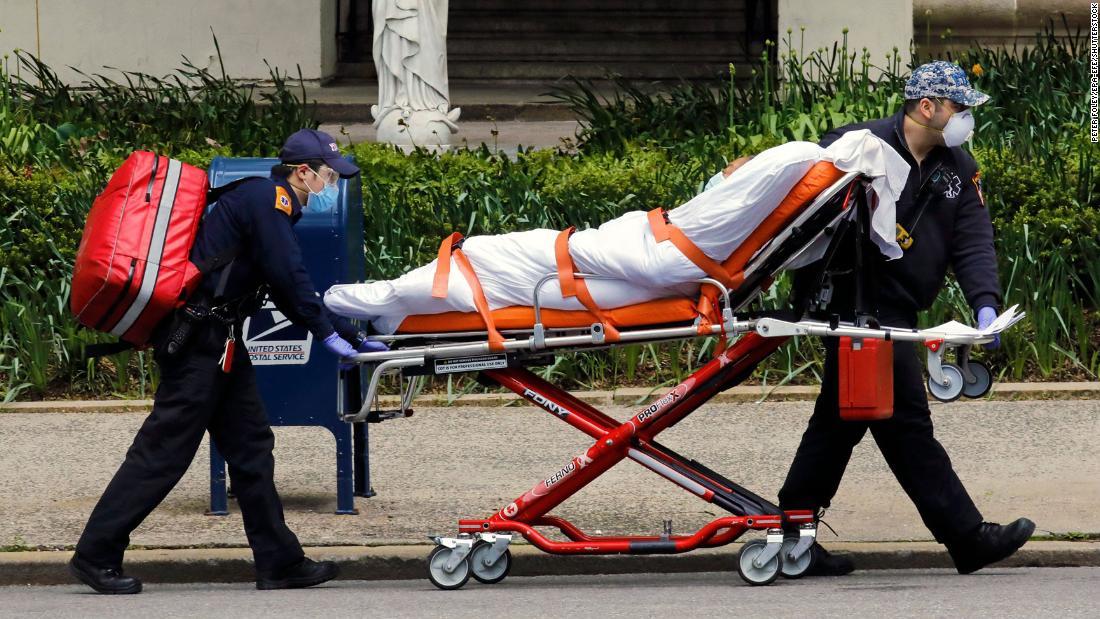 Released Monday, the reports are part of a series published by the agency as experts have raced to understand the virus, its effects and the country’s response to the crisis. So far, more than 1,347,900 Americans have been infected while at least 80,684 have died.

In New York City, the virus may have directly or indirectly killed far more people than the city’s official death toll shows, according to one of the two reports.

Researchers found that while the city reported 24,172 more deaths since mid-March compared to what would normally be expected, only about 19,000 of them were directly linked to the virus.

And while it’s hard to track why the other 5,000 deaths occurred, the report says one reason may be that “social distancing practices, the demand on hospitals and health care providers, and public fear related to COVID-19 might lead to delays in seeking or obtaining lifesaving care.”

Those findings add to a growing body of evidence highlighting how the pandemic may be killing Americans without ever infecting them. For example, experts have also said that a decline in reported heart attacks and strokes across the country is likely the result of people avoiding emergency rooms.

In the second report, researchers say airport screening of travelers from China and Iran failed to prevent the spread of the virus, at least in California.

More than 11,500 travelers were screened and monitored but just three ended up testing positive, according to a team from the California Department of Public Health.

The program’s effectiveness was limited by “incomplete traveler information received by federal officials and transmitted to states, the number of travelers needing follow-up, and the potential for presymptomatic and asymptomatic transmission,” the report said.

Those reports come a day before key health officials — including CDC Director Dr. Robert Redfield — are set to testify remotely before a Senate committee on how local, state and federal leaders have aided in reopening the country’s economy.

By early next week, 48 states will have relaxed at least some measures as the country moves toward reopening — but heavy debate remains around whether it’s safe to begin carving a path to normalcy just yet.

Experts and public health officials have for weeks warned a premature release of measures could drive the US death toll up by thousands.

But business owners and some local officials across the country have demanded stay-at-home orders be lifted to avoid a crash of the economy — amid an already unprecedented amount of unemployment claims in many states.

In California, where the governor created guidelines last week for regions to meet before beginning to move forward toward reopening, officials in San Diego said their city is ready to go back to business.

“I admire the governor and the work that he’s been doing but I think the standard he set last week, to not allow businesses to reopen unless the counties have gone two weeks without any deaths, is unrealistic in any urban county,” San Diego Supervisor Greg Cox said. “We certainly want to work with him in a cooperative vein but we need to have standards that are attainable.”

In Louisiana, Gov. John Bel Edwards announced Monday he will lift the state’s stay-at-home order Friday, adding the state would be moving into phase one of its reopening plan.

Restaurants, casinos, churches, hair salons, and gyms are some of the businesses that can open with restrictions during that first phase, but are limited to 25% occupancy and must practice social distancing.

And in Hawaii, state officials are considering starting to take photos of all visitors flying into the state, as they continue to deal with violators of the mandatory 14-day quarantine currently in place for travelers.

“If we know someone has broken quarantine, we (currently) don’t have a photo that we can distribute and have people help us identify who they are,” Gov. David Ige said in a Facebook forum with the Honolulu Star-Advertiser newspaper Monday.

Here’s where all 50 states stand on reopening

In South Dakota, where a stay-at-home order was never issued, two Native American tribes have refused to remove checkpoints they put in place to protect their reservations from spread of the virus, despite pressure from the governor.

Gov. Kristi Noem gave the tribes 48 hours Friday to take down the checkpoints from US and state highways. Both tribe leaders refused and the governor accused the communities Monday of stopping essential traffic and first responders.

“Deliveries of gas, medical supplies and food are incredibly important to make sure that we have that facilitated through these areas,” Noem said, adding that some travelers who wanted to just travel through the checkpoints were turned around.

The tribes disputed the allegations to CNN and the governor said Monday she would not “give specific stories today.”

“We are not getting complaints and the Governor has not shared any specific complaints with us,” Remi Bald Eagle, spokesman for the Cheyenne River Sioux Tribe, told CNN, adding “it’s hard to address hearsay.”

On Sunday, the chairman of the Cheyenne River Sioux Tribe, Harold Frazier, told CNN that “99.9% of the motorists are stopped for maybe a minute or less and they’re allowed to go through.”

He said if travelers were “coming from hotspots with no reason to be here — doing non-essential travel” then the tribe has “turned people back.”