California coronavirus: After crowd gathers for concrt without masks, officials ask them to self-quarantine 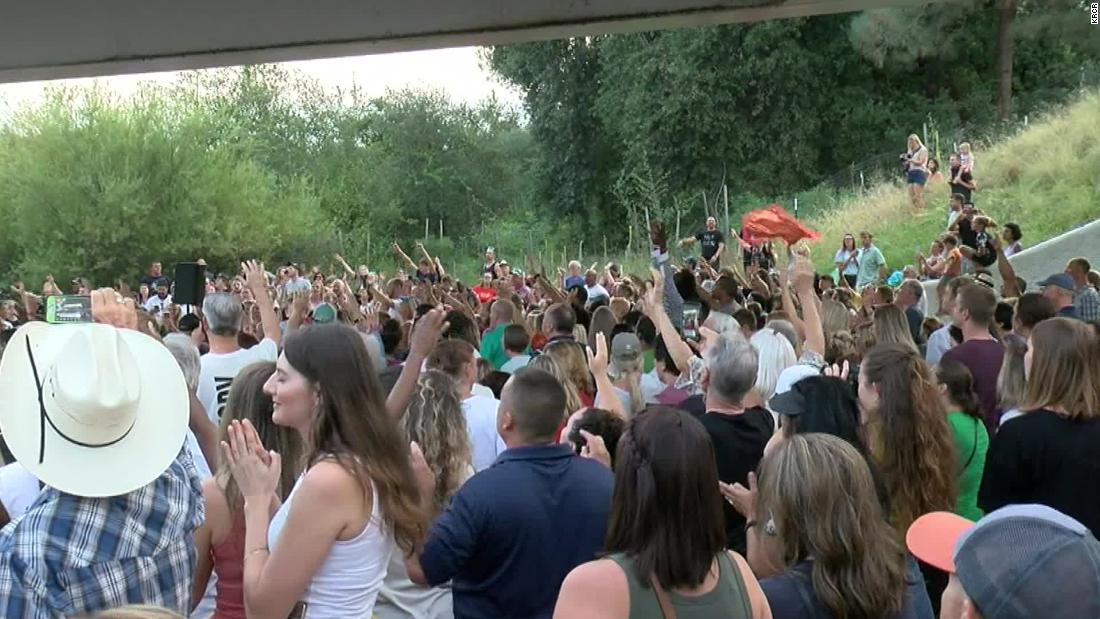 Shasta County’s health department is asking people who attended Wednesday evening’s Christian music and faith event in Redding to self-quarantine for 14 days, get tested and monitor for possible symptoms.

“While outdoor faith gatherings are allowed, this event did not follow state guidelines” such as people staying 6 feet apart or wearing masks when that’s not possible, and therefore the event “put our community at risk,” the county agency said in a news release.
The event was publicized by Hold The Line, a faith-based political activist movement created by Sean Feucht, a Christian worship musician in Northern California who ran and lost in a March primary for the state’s 3rd Congressional District seat.
A 42-minute video posted by Hold The Line shows some people spreading out, especially on embankments, but many of them are still close together and not wearing masks.

After receiving criticism on social media and from county health officials for holding the event, Feucht posted an online statement defending it.

“Government leaders voiced support for outdoor protests in recent months; they should not be condemning Christians seeking to gather in worship,” his post reads.

“Masks were made available, social distancing was encouraged, and the gathering was held outside as an extra precaution.

“The freedom to worship God is the constitutional right of every American citizen and those who exercise this right should not be unfairly targeted for criticism.”

California has enacted a host of social distancing rules and activity bans — some of which deal with indoor and outdoor religious gatherings — as it tries to curb recent spikes in coronavirus cases.
Outdoor worship services are allowed, with restrictions. The state says that, at a minimum, outdoor attendees who aren’t from the same house should be at least 6 feet apart.
Also, the state requires people to wear face coverings outdoors when distancing is not possible, regardless of whether they’re at a religious gathering.
Feucht previously told Los Angeles television station KTTV he’s been holding outdoor events like Wednesday’s as a response to the state’s even stricter pandemic rules for indoor worship.
How strict the rules are depends on the county’s infection data. California currently has about 30 counties on a coronavirus “watch list” for having elevated rates of Covid-19 infections or related data. Those counties are to temporarily ban indoor worship.

Counties not on the list — like Shasta County, which had 268 confirmed coronavirus cases as of Thursday — allow limited indoor worship. Indoor singing and chanting is banned, and indoor attendance is limited to 25% of capacity or 100 people, whichever is lower.

Shasta County’s health agency said Thursday that it empathizes with “all who have had to change the way they worship in the past few months.” But it pointed out that other groups have sacrificed.

“Our students have sacrificed traditional graduations, and people have had to postpone weddings and hold funerals without loved ones present,” the agency said. “Local businesses continue to struggle. If Shasta County ends up on the state’s watch list, our children wouldn’t be allowed to return to school in person, and our businesses and churches will face further restrictions.”

Statewide, more than 12,000 new coronavirus cases were reported Thursday — the second-highest daily tally during the pandemic.

Officials suggest they were misled about the event beforehand

The county health agency and the Redding city government suggested in statements that they felt misled about the event’s magnitude before it happened.

The county agency said Redding officials “were assured that the event would involve social distancing.”

The city government’s statement says it didn’t approve the event beforehand, in part because it didn’t believe the concert would rise to the level of needing approval.

People have the right to peacefully assemble without approval, the city said, but a permit is required “when the organizer is requesting special services or dispensations.”

“This was not supposed to be the case in (Wednesday’s) gathering,” the city said.

Feucht did not respond to CNN’s request for comment. On Facebook, Feucht wrote that he shared his “plans with city council … (and) they asked me to reach out to the local health department.”

“We did that and we never received a response. I assumed that was sufficient and that we had the green light,” he wrote.

The county health agency said the event organizers never contacted it. But after hearing about the event, it did “reach out and … called out the social distancing requirements for outdoor services,” it said.