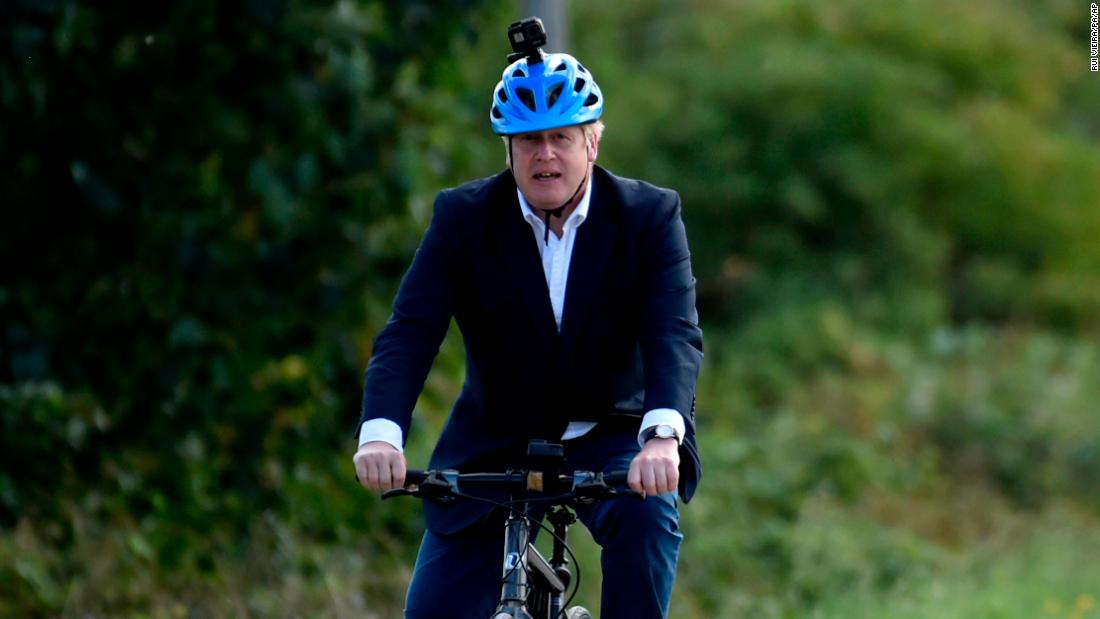 Being obese or heavily overweight increases the risk of death from Covid-19, according to Public Health England. The UK government believes 63% of adults are above what would be considered a healthy weight.

The new measures include a ban on junk food advertisements before 9 p.m., tools to help people lose weight and a proposal requiring restaurants to show how many calories their dishes contain.

As part of the strategy, Johnson has spoken about his own weight loss in strikingly personal terms. The British Prime Minister was infected with coronavirus earlier this year and was admitted to ICU in April, at the height of the UK’s lockdown.

Johnson has said that he was “way overweight” at the time of his illness. “I was too fat,” he said in a video posted to his Twitter account on Monday.

“I’ve always wanted to lose weight for ages and ages,” Johnson added. “And like […] many people, I struggle with my weight.”

“If you can get your weight down a bit […] and protect your health, you’ll also be protecting the NHS,” he said.

The strategy is a significant shift for a leader known for his dislike of the “nanny state.” Johnson has in the past opposed similar initiatives by previous governments.

The PM’s spokesperson said Johnson’s personal experience had not shaped the policy but added that the pandemic had “highlighted the increased risks to the nation of not getting a grip on obesity.”

The government hopes its campaign will encourage those who are overweight to lose around 2.5kg [5.5 pounds], claiming such an outcome would deliver £105 million [$135m] in NHS savings over the next five years.

But the new strategy has caused disquiet among campaigners and people recovering from eating disorders. Of particular concern is the proposal to make some restaurants list the number of calories in dishes.

Eve Bennett, 20, spent part of her teenage years struggling with counting calories. “When I was 14 or 15 I started using an app to track my calorie [intake],” the student told CNN.

“I got very obsessive over calorie counting and I would try to beat myself each day [by eating less than the day before] and I wasn’t eating enough.”

Bennett eventually stopped using the app but dislikes the calorie-listing proposal. “When you’ve been through that […] you do find yourself hyper-conscious of calories, which is why I find the idea of calories on menus so terrifying,” she said.

Around 1.25 million people in Britain have an eating disorder, according to Beat, a charity that offers support to those affected by them. Around 20% of those suffering from anorexia will develop a chronic condition; the disease has one of the highest mortality rates among psychiatric disorders.

“Eating disorders are a massive problem in this country,” Liberal Democrat MP Wera Hobhouse, who is the chair of the All-Party Parliamentary Group on Eating Disorders, told CNN.

“Making restaurants disclose the calorie continent of a meal — that could be very damaging for people in recovery.”

Beat spokesperson Tom Quinn agrees. Quinn is critical of the language used throughout the Better Health campaign as well as the calorie counting measure.

“We are very concerned that this will have a detrimental impact on people with or at risk of developing an eating disorder,” he told CNN.

“We are already starting to hear from people who are very distressed, […] who think these measures will increase their eating disordered behaviors.”

Quinn told CNN that Beat welcomed some of the new policies, including the government’s planned expansion of NHS weight management services.

Beat also has no opposition to the ban on junk food advertisements before 9 p.m., the time when children are most likely to see them.

The ban restricts advertising of food high in fat, sugar or salt on television and online. The government will also hold a consultation on whether to ban online ads completely. But despite the high-profile campaign, the restriction is not expected to be in place until 2022.

And though government ministers are championing the new policy package, the junk food advertisement ban follows the rollout of the UK’s “Eat Out to Help Out” plan.

That scheme is designed to help the struggling restaurant industry, including the same fast food outlets that the ban penalizes.

Under “Eat Out to Help Out,” members of the public are entitled to a 50% discount, up to a value of £10 ($13.09), in restaurants from August 3 to August 31. Numerous fast food chains have registered for the scheme, including McDonald’s, KFC and Five Guys.

Quinn is critical of how Johnson has linked supporting the NHS to losing weight.

“Some of the language is quite stigmatizing,” he said. “[There’s an] implication that people with obesity are costing the NHS money and harming other people. If you lose weight to save lives, the implication is that you’re costing lives if you don’t [lose weight],” he added.

“There’s a sense of focus on the individual.” Quinn said the strategy did not have enough focus on the wider societal factors that contribute to obesity.

Hope Virgo, a campaigner who lived with anorexia as a child, has launched a petition to try and convince ministers to reverse the calorie listing measure.

“Seeing the government’s strategy was very, very difficult,” she told CNN. “If I went into a [restaurant with a] menu and there were calories [listed] left, right and center, I would find it really distressing.”

“Cycling and walking have a huge role in tackling some of the health and environmental challenges that we face,” Johnson said on Twitter.

“I like the fact that they’re encouraging movement,” Virgo said. “And that we’re encouraged to exercise — they should do that instead of scaring people and creating this fear around weight.”

Virgo added: “My big concern is [that] they’re taking a very one size fits all approach. For people with bulimia or [who] binge eat, [calorie listing] could exacerbate their illness.”

Liberal Democrat Hobhouse believes the strategy ignores the deeper-rooted causes of obesity in the UK.

“The reasons for our obesity have got very deep structural problems,” she said. “I understand it more to be a socioeconomic issue. It’s a question of household budgets.”

“The problem is that [in] poverty you do not have a choice. [Some people] don’t have pots and pans and don’t know how to cook a healthy meal.”

She added: “[The strategy] might help some communities and some people but it will pass by people for whom [healthy eating] is not a simple choice.”

“With over six in 10 adults and more than one in three children aged 10-11 years overweight or obese, we do need to ensure that people are equipped with the knowledge to make decisions about their food intake,” a government source said.

The source added that officials “recognize concerns about calorie labeling and are committed to striking a careful balance between informing and educating people to make healthier choices, whilst not negatively impacting people with eating disorders or those in recovery from eating disorders.”

Aleesha Khaliq and CNN’s Luke McGee contributed to this story.