Bright satellites in the thousands could impact future space discoveries 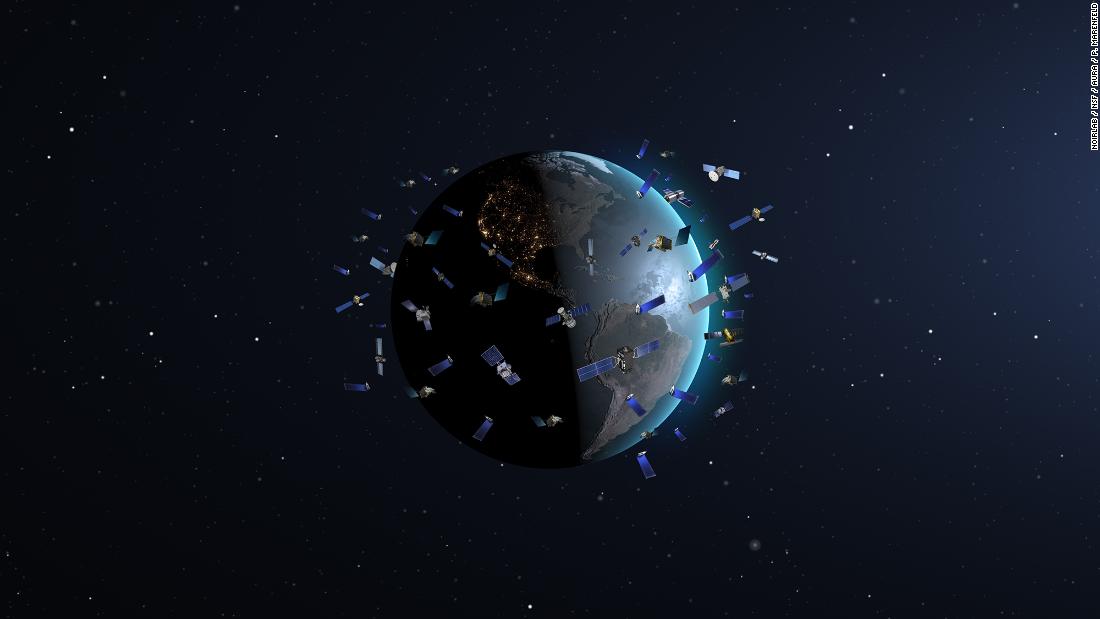 It’s estimated that 107,000 low-Earth orbit satellites are scheduled to be launched in the next decade.

The astronomy community grew concerned about these manmade constellations after SpaceX’s initial launch of 60 Starlink communication satellites on a single rocket in May 2019. More launches have taken place since then, and future launches are planned.

Prior to launch, SpaceX had suggested that the satellites would be just barely visible, according to the American Astronomical Society. Within days of the launch, it was clear to astronomers and stargazers alike that the metal satellites, which reflected the light of the sun, appeared as bright as astronomical constellations in the night sky.

In fact, the formation of satellites orbiting Earth and their unique “strands of pearls” appearance actually led to people reporting UFO sightings because they didn’t realize satellites could be so visible in our night sky, according to the AAS.

One of the goals of these constellations of LEOsats, as low-Earth orbit satellites are known, is to help provide communication in remote and underserved areas.

“I think it’s commendable and very impressive engineering to spread the information and opportunities made possible by internet access,” said Megan Donahue, president of the American Astronomical Society, in a statement. “But I, like many astronomers, am very worried about the future of these new bright satellites.”

Astronomers estimate that these satellite “swarms” could become the dominant bright objects in our sky, rather than stars. That disruption could change how astronomers, professional and amateur, see the night sky, they said.

The National Science Foundation’s NOIRLab and the American Astronomical Society organized the Satellite Constellations 1 workshop in late June to bring the astronomy community together with satellite operators. The agenda was to understand and potentially mitigate the impact of satellites on astronomy.

This forum allowed astronomers time to observe the satellite constellations launched by SpaceX and OneWeb over the last yearand run simulations to understand the impacts when more constellations are launched.

The virtual SATCON1 workshop allowed for over 250 scientists, engineers and commercial satellite operators, including those from SpaceX, to work together.

Team members from the workshop shared findings and recommendations, including those for satellite operators and observatories, on Tuesday when the report was released and delivered to the National Science Foundation. The NSF finances many of the large ground-based telescopes available to researchers for observations across the United States.

Overall, the impact to astronomical research, including astronomy based on visible and infrared light, ranges from negligible to extreme, the authors of the report concluded.

How astronomy will change

These satellite constellations weren’t an issue 10 years ago when the National Research Council of the National Academy of Sciences released its Astro2010 decadal survey of astronomy and astrophysics. The survey, which identifies priorities in these fields and suggests new ones for the decade, is released every 10 years and helps US government agencies determine funding.

The top recommendation of the 2010 survey was funding and development of the Vera C. Rubin Observatory. The observatory, located in Chile but run by America’s National Science Foundation, will begin science operations in 2022. It’s designed to produce the deepest, widest image of the universe as it conducts a 10-year survey of the sky. The observatory’s wide field of view could help answer questions about the universe and detect faint celestial objects.

But these satellite constellations will affect the observatory’s view.

“Rubin Observatory and the giant 30-meter telescopes coming online in the next decade will substantially enhance humankind’s understanding of the cosmos,” said Jeff Hall, SATCON1 co-chair from Lowell Observatory and chair of the AAS Committee on Light Pollution, Radio Interference, and Space Debris, in a statement. “For reasons of expense, maintenance, and instrumentation, such facilities cannot be operated from space. Ground-based astronomy is, and will remain, vital and relevant.”

The report’s first finding is that these satellite constellations will have the greatest impact on observation programs that occur during twilight, when the sun is below the horizon for ground-based observations. But the sun still reaches the satellites that remain illuminated hundreds of miles above.

The programs that rely on twilight observations include the search for near-Earth objects like asteroids and comets, objects in the outer solar system and the fleeting signatures of gravitational wave sources.

One recommendation in the report to mitigate this impact is to keep satellites to 373 miles or lower to restrict this interference. However, some future satellites, like a constellation planned by OneWeb, will orbit about 750 miles above Earth and directly in this interference zone. These satellites could be visible all night during the summer and for much of the night during other seasons “and will have negative impacts on nearly all observational programs,” according to the report.

A dark sky is full of potential. The Hubble Space Telescope observed a seemingly blank part of the sky in 1995 for 10 days. This small target revealed the Hubble Deep Field, filled with thousands of galaxies stretching back to the early years of the universe.

“Dark skies hold many secrets, and the flagship ground-based facilities of today are steadily revealing them,” the authors wrote in the report.

The light trails left by these orbiting constellations will disrupt the detection of exoplanets orbiting cool M-dwarf stars, which some astronomers believe might be habitable. It could also interfere with the discovery of new objects or phenomena not yet predicted.

The second finding of the report includes six ways to mitigate the impacts on astronomy. The first one is impractical and unlikely: “launch fewer or no LEOsats.” But, the authors wrote, “this is the only option identified that can achieve zero astronomical impact.”

The other suggestions are more practical. They include deploying satellites no higher than 600 kilometers or 373 miles above Earth, darkening the reflective surfaces of the satellites or using sun shades to shadow them and orienting the satellites so they reflect less sunlight.

The authors also suggested minimizing or eliminating satellite trails in astronomical images through software and the sharing of accurate orbital information regarding satellite positioning so scientists can avoid them.

These, and other specific recommendations targeted to observatories and satellite operators working together, include immediate action items as well as long-term strategy.

“SpaceX has conducted a series of development efforts exploring possible mitigation strategies,” according to the report, including those to darken the satellites.

A future SATCON2 workshop that will focus more on areas of policy and regulation is scheduled for the first half of 2021.

“I hope that the collegiality and spirit of partnership between astronomers and commercial satellite operators will expand to include more members of both communities and that it will continue to prove useful and productive,” said NOIRLab director Patrick McCarthy in a statement.

“I also hope that the findings and recommendations in the SATCON1 report will serve as guidelines for observatories and satellite operators alike as we work towards a more detailed understanding of the impacts and mitigations, and we learn to share the sky, one of nature’s priceless treasures.”