Banana bread is having a moment 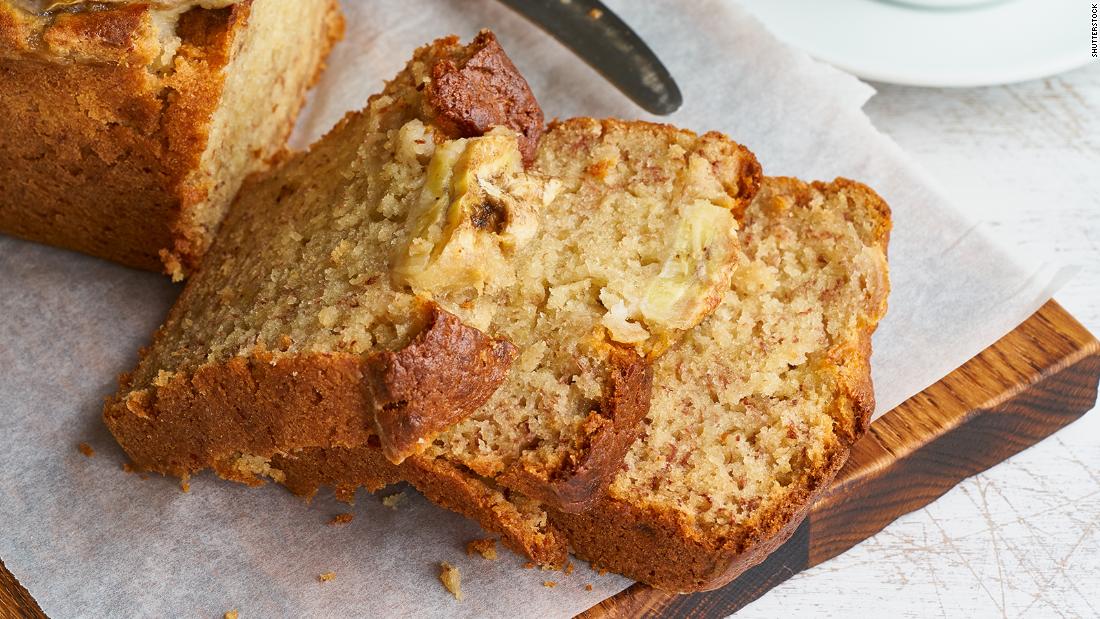 A rapping loaf of banana bread is the star of a quarantine-themed novelty song, and even celebrities are tying on their aprons.

In March, Chrissy Teigen made headlines when she traded a loaf of her signature banana bread for a bag of romaine lettuce after discovering that Los Angeles grocery stores were sold out. (Find Teigen’s banana-bread recipe, which includes shredded coconut, chopped dark chocolate and vanilla pudding mix here.)
Psychology explains the banana-bread trend, said Julie Ohana, a licensed master social worker and the founder of Culinary Art Therapy in West Bloomfield, Michigan, where she uses cooking as a means of communication and expression.

But the benefits of baking go beyond nostalgic comfort food, explained Ohana, who believes spending time in the kitchen can help manage stress, increase self-esteem and teach mindfulness.

As screen time goes up for many Americans, Ohana said that baking is a valuable chance to unplug. “Close the screen, step away from it all, gather some ingredients,” she suggested. “Do something that’s much more of a sensory experience.”

Even the simple, repetitive movements of baking, such as stirring batter, cracking eggs and kneading bread can bring mental health benefits, Ohana said.

“There’s a psychological term called ‘cadence,'” she explained. “When you do something over and over again, it creates stability and feelings of comfort… it soothes our minds and our bodies.”

An all-American recipe for the pandemic

For thousands of years, cooks used yeast to add loft to their baking, which could mean long hours tending to rising bread. But by the 18th century, Americans were baking with alkaline salts such as pearlash and potash that raised baked goods via a quick chemical reaction, and were the precursors to modern-day baking soda and baking powder.

The use of chemical leavenings, as baking powder and soda are called, helped create whole new categories of baked goods. One of those is quick breads, Civitello said. (Quick breads include now-familiar treats such as banana bread, pumpkin bread and poppy-seed bread.)

But when Americans baked their first quick breads in the 18th and 19th centuries, bananas were not on the average household shopping list. Bananas were uncommon and expensive until the early 20th century, when the United Fruit Company brought in vast shipments from plantations in Latin America.

At a time when resources were scarce, Americans were scrupulous about preventing food waste, making banana bread a favorite. “They were able to take overripe bananas and do something good with them,” Hamel said.

Researching recipes from the 1930s, Hamel discovered versions published by Better Homes and Gardens, the United Fruit Company and the Pillsbury Flour Mills Company. And Hamel, whose own favorite banana bread recipe is this whole-grain version from King Arthur, said that the homey treat has evolved over the decades.

After the Second World War, housewives made basic, hefty loaves to feed big families. In the 1960s, a back-to-the-land aesthetic brought in whole-wheat flour and brown sugar. In fact, Hamel thought that part of banana bread’s enduring appeal might be how easy it is to tweak the recipes to changing fashion and personal tastes.

“Banana flavor goes with everything,” she said, whether you’re stirring in nuts, adding pineapple or throwing in a handful of chocolate chips. “The batter is thick enough that it can support add-ins, and they don’t all fall to the bottom.”

Hamel added that for many Americans, banana bread is a reminder of the past.

Culinary art therapist Ohana agreed. “It’s about the connection, it’s about the memories and it’s about associating other positive experiences along with the banana bread.”

When Ohana makes banana bread, she reaches for a recipe passed down by her grandmother. “The funny part is, there’s nothing noteworthy about her recipe,” Ohana said. “It’s probably just like a million other banana-bread recipes.”

But as she copes with the isolation of social distancing, Ohana is revisiting recipes that connect her to memories of loved ones.

“A sense of smell is the strongest sense tied to memory,” she said. “When I open that oven door and the first whiff hits me, I just think about my grandma.” For her, it’s a small way to offset the uncertainty and stress of the pandemic.

“What’s carried me through these crazy times is to find moments of joy,” Ohana said. “The banana-bread recipe helps to do that.”