As the US races to vaccinate the country, J&J vaccine distribution will slow down 84% next week 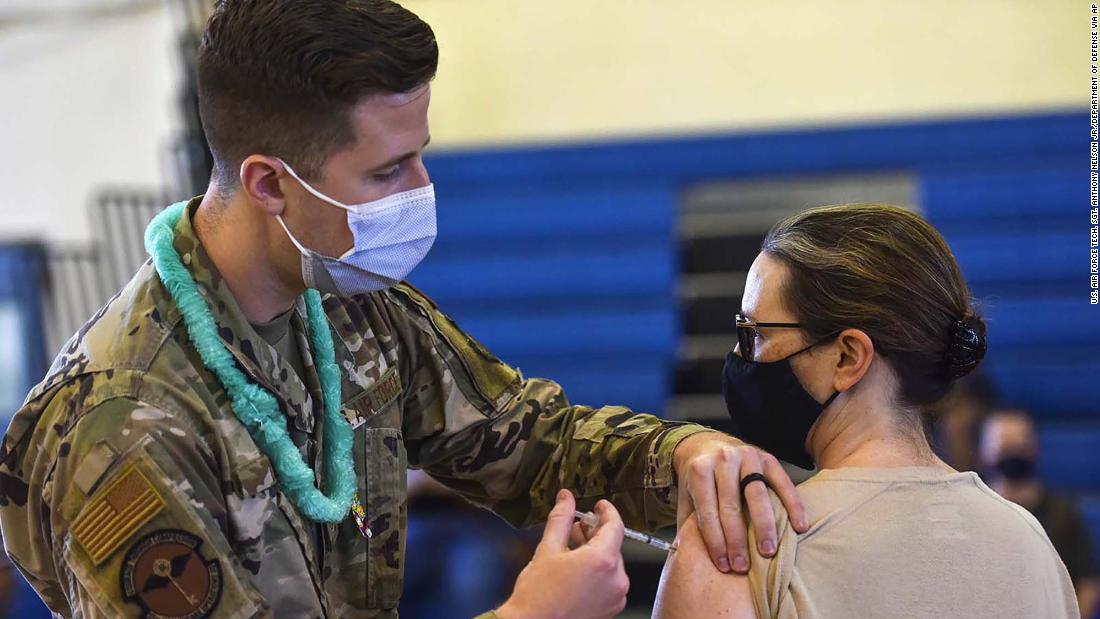 J&J would not directly answer CNN’s questions about why the supply has slowed down, but Jeff Zients, the White House Covid-19 response coordinator said at a briefing Friday, that the supply to states won’t change until its independent manufacturing plant gets a green light from the FDA.

Since the vaccine was authorized in February, Johnson & Johnson fell short of its February goal, but it was able to meet its commitment to deliver 20 million doses in March. Thursday J&J told CNN it is on track to meet its target of producing 100 million doses of vaccine for the United States by the end of May. In a press release last week, the company said it was on track to deliver 24 million of those doses through April, but when asked by CNN on Friday, the company did not firmly stand behind that April goal and referred CNN to Zients’ comments at the Friday briefing, which stated that the company had reiterated “its commitment to provide at or near 100 million vaccine doses by the end of May.”
The Biden administration has consistently said the J&J supply would be “uneven.”

The states are already feeling the impact of this uneven distribution. On Thursday, Maryland’s Governor Larry Hogan confirmed at a news conference that there would be an 85% reduction in his state’s allocation of J&J vaccine doses.

Hogan said this is a serious concern since it could mean that Maryland is about “a quarter million doses short.”

“That’s really difficult when you got three thousand points of distribution all counting on more doses,” Hogan said.

Texas’ Department of State Health Services said it too has seen a “major reduction” in J&J allocated doses, going from 500,000 doses this week to 130,000 next week.

Connecticut Governor Ned Lamont said Thursday that it will receive roughly 6,000 J&J doses next week from its federal allocation instead of the initially anticipated 20,000 doses.

“We had always anticipated the Johnson & Johnson deliveries to step down this week and beyond, but it’s stepped down significantly more,” said Governor Ned Lamont.

J&J’s Covid-19 vaccine was expected to be a game changer, since it is a single dose vaccine, compared to the two-dose Moderna and Pfizer, and didn’t need any special refrigeration. A large supply of this vaccine would protect more people faster.

The problem seems to be with the company’s supply of the drug substance it uses for the vaccine. J&J has been getting its drug substance from its vaccine arm Janssen in the Netherlands, according to the Biden administration, and it then goes on to fill and finishing plants that have been doing the final stage process of the vaccines.

The company has been trying to add additional manufacturing capacity in the US, but it has had problems with one of those manufacturers, Baltimore-based Emergent BioSolutions. In June, Emergent signed a $628 million contract with the Trump administration’s Operation Warp Speed to manufacture Covid-19 vaccines. It has worked with AstraZeneca and J&J. So far though, it hasn’t been authorized by the US Food and Drug Administration to produce any vaccines.

Last week, Emergent told CNN there was a problem that affected a single batch of “bulk drug substance” used to make vaccine. The company’s quality control systems caught the batch that “did not meet specifications and our rigorous quality standards” before it got any further.

A person who is familiar with this particular manufacturing process told CNN Thursday that “batches are lost all the time in this industry, it’s just the nature of the complexity of what we do.”

Typically, a company’s safety systems will continuously monitor for problems and if there are irregularities in any of the product, the company will have to isolate it and dispose of that batch.

According to a FDA inspection report obtained by CNN, Emergent has had some, what the FDA calls “observations,” the agency doesn’t call them violations, with their manufacturing processes in the past.

It is not clear from the redacted report what drug or substance these observations were connected to, but the inspections happened prior to the company’s work on the J&J and AstraZeneca Covid-19 vaccines.

The inspection report from last April showed the company had to reject material before, but there was no “associated non-conforming material report initiated” for the material “indicating the rationale for rejection, as per written procedure.” The reports also showed that for one procedure, “there was no documented evidence the preparer has been trained on that relevant procedure(s).” Another report said that “data generated from laboratory analyses is not reviewed in a timely manner or in accordance to the written procedure.”

Compliance expert, John Avellanet, the Managing Director of Cerulean Associates, LLC said the fact that Emergent got what’s known in the industry as a 483 report from the FDA is “significant.”

“Only something in the neighborhood of 15% or less of FDA inspections end in non-compliance observations on a Form FDA 483, so when one gets a 483, it is significant.” Avellanet said in an email to CNN.

Jesse Goodman, a former FDA Chief Scientist who now works as a Professor of Medicine at Georgetown, said it is not uncommon for a comprehensive inspection to result in a 483. He said that quality and audit systems are there to prevent problems in a final product.

“I would say that there are a number of observations that raise substantial questions about the sufficiency of the procedures, processes, and systems that must be in place to help ensure robust control of product quality,” Goodman said in an email to CNN.

“You will never in a very complex environment prevent 100% of all errors or mishaps, but you want strong quality systems and oversight in place to, number one, reduce those to the extent that’s humanly possible; and number two, be sure you will detect them and act on them promptly and aggressively to ensure safe, effective products,” Goodman said.

According to a CNN review of public records, Emergent never received a FDA warning letter which is an additional step the agency can take in enforcing compliance.

A person who is familiar with Emergent’s particular manufacturing process told CNN Thursday that the company has taken corrective action to improve performance issues related to the FDA’s report.

J&J has assumed full responsibility for the manufacturing of the drug substance at the Emergent facility. It added experts for operations and quality to the operation and significantly increased the number of manufacturing, technical and quality operations staff to work with the experts it already had sent to Emergent. J&J told CNN Thursday that it is working closely with the FDA so it get the official sign off from the FDA to use the facility.

“There’s a lot of vaccine in the queue if you will, to ultimately make it out to the people that need it assuming the FDA approves the EUA” a source familiar with Emergent’s manufacturing process said.

As far as when that will happen, it’s unclear. The FDA said it cannot comment on any particular company or its manufacturing.

“What the company has told us,” Zients said on Friday, “is once they have authorization, that they will be able to have a weekly cadence of up to 8 million doses per week by the end of the month.”