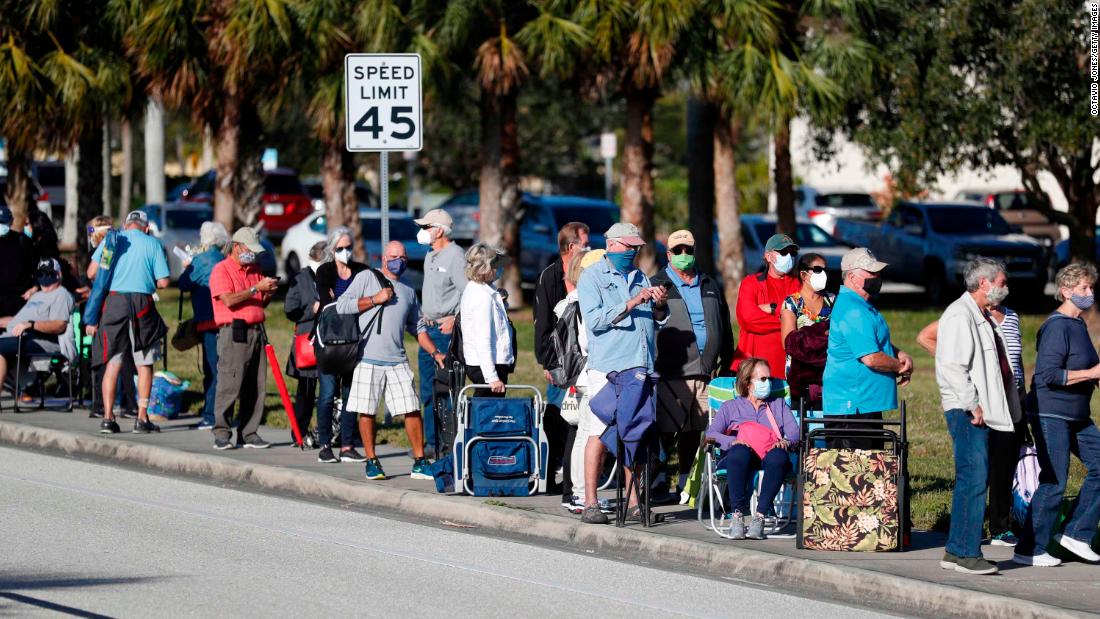 Just 5.3 million of the 17.3 million doses distributed have been administered in the United States — only 30.7%. That doesn’t come to close to the target the Trump administration set in the fall to administer 20 million vaccines to Americans by the end of 2020. So, many states are taking steps to speed things up.

In Montana on Tuesday, Gov. Greg Gianforte shifted some Covid-19 vaccination policies “effective immediately” to include people 70 and older and those 16 to 69 with specific conditions.

“We cannot have vaccines sitting on the shelf,” he said.

In Florida, Gov. Ron DeSantis has warned hospitals that if they aren’t distributing the vaccine quickly enough, they may lose additional allotments. The state has expanded vaccinations to seniors over the age of 65, and demand has been so high that some seniors camped out overnight to get one. One location in Daytona Beach reached capacity two hours before the doors even opened.
On Monday, Trump officials told CNN that they will continue to allow states to make decisions about vaccine campaigns. They encouraged states to expand vaccine availability to pharmacies and allow more people to get their shots. US Surgeon General Dr. Jerome Adams on Tuesday urged states to quickly move on to additional priority groups.

“States all across the country feel beholden to the Advisory Committee on Immunization Practices guidelines to vaccinate everyone in group 1a before they move to 1b and beyond and what I want people to know is these are guidelines,” Adams said.

In those guidelines from the CDC vaccine advisory committee, health care workers and residents in long-term care facilities are the top priority to receive vaccines — Phase 1a. Next, Phase 1b includes people 75 years and older and frontline essential workers who do not work in the health care sector such as firefighters, corrections officers and utility and transportation workers. The next phase, 1c, includes people 65 to 74, people ages 16 to 64 with high-risk medical conditions and other essential workers.

“If the demand isn’t there in one location, move those vaccines to another location,” Adams said Tuesday on NBC’s Today show.

US Health and Human Services Secretary Alex Azar said Wednesday that he has been encouraging governors to move ahead and use “every bit” of the vaccine.

“If for some reason their distribution is struggling, and they’re having vaccines sit in freezers, then by all means, you ought to be opening up to people 70 and over, 65 and over, you ought to be making sure that the nursing home patients are getting vaccinated,” Azar said on Wednesday.

Some states are lining up members of the public for vaccinations.

In Georgia, fewer than a quarter of doses of the coronavirus vaccine that have been distributed have ended up in people’s arms, putting it near the bottom of all state efforts, according to data from the CDC. Until last week, Georgia was one of many states that had formally stuck to the guidance from federal health officials to first vaccinate only health care workers and residents of long-term care facilities before moving on to other vulnerable populations.

With vaccines sitting, the state is loosening its rules and shifting its priorities. The plan? Unleash the elderly populations.

Last Thursday, Louisiana announced residents in its Phase 1b group, people 70 and older and additional health care workers, could start making reservations at pharmacies across the state to get a limited number of the Moderna Covid-19 vaccine. The health department said Tuesday that hospitals can use extra doses for any currently eligible groups.

In Charlotte, North Carolina on Wednesday, Atrium Health said it had shifted to Phase 1b based on guidance from the state and CDC advisory committee, and administered its first vaccine doses to the general public. It said “hundreds” had already scheduled appointments, which are required for vaccination.

“We’re working to ensure the distribution of the vaccine is inclusive and with as few barriers as possible,” Dr. Gary Little, chief medical officer at Atrium Health said in a statement. “Scheduling and receiving the vaccine when it’s available is the best way we can all take part in ending this pandemic, while saving many lives in the process.”

Other states are preparing to open up the line — but not just yet.

New Hampshire Gov. Chris Sununu on Tuesday praised his state’s vaccine efforts and said it should start vaccinating people in the state’s Phase 1b group — including seniors 75 and older — by mid-January.

Ohio Gov. Mike DeWine said Tuesday he hopes the state will start its next phase of the vaccine rollout in about two weeks, depending on vaccine availability. Ohio’s Phase 1b includes people 65 and older and people with certain medical conditions, as well as K-12 teachers and staff.

In Illinois, Governor JB Pritzker announced residents 65 or older could get the vaccine in the next phase, which will begin in “a few weeks.”

And in South Carolina, Gov. Henry McMaster set a January 15 deadline for the people in Phase 1a to get the vaccine. If these health care workers and nursing homes residents don’t sign up by then, they will be “moved to the back of the line” to make room the next groups.

Despite pressures to speed up vaccinations, funding has been a major hurdle.

States turned in vaccination plans to the CDC in the fall, but they “weren’t given necessarily all the tools that they need to make this a success,” according to Jennifer Kates, the senior vice president and director of global health and HIV policy at the Kaiser Family Foundation.

Past legislation provided only about $340 million, Kates said. Congress just passed a stimulus bill that will send more money to states and local jurisdictions for vaccine distribution.

On Wednesday the US Health and Human Services Department announced over $3 billion will go to states to help vaccinate people.

“Hopefully that will help, but it comes late in the process since states are already doing vaccine rollout, yet the resources haven’t been there,” Kates said.

“It’s basically a shoestring to pull off the most massive vaccine effort we’ve ever seen,” Kates said. “They might have plans on paper, but that doesn’t necessarily mean states were ready to implement it at full speed right away.”

But if states expand too fast, demand may be too great and cause more holdups and frustration for people who most urgently need vaccines.

“Nationally, it’s a little bumpy in some places and better in others, but it’s important to remember, we’re in the initial phases,” Kates said. “Hopefully that will get smoothed out.

“The last thing you want is for people to go get their vaccine and not be able to get it.”