As Covid-19 lurks, families are locked out of nursing homes. Is it safe inside? 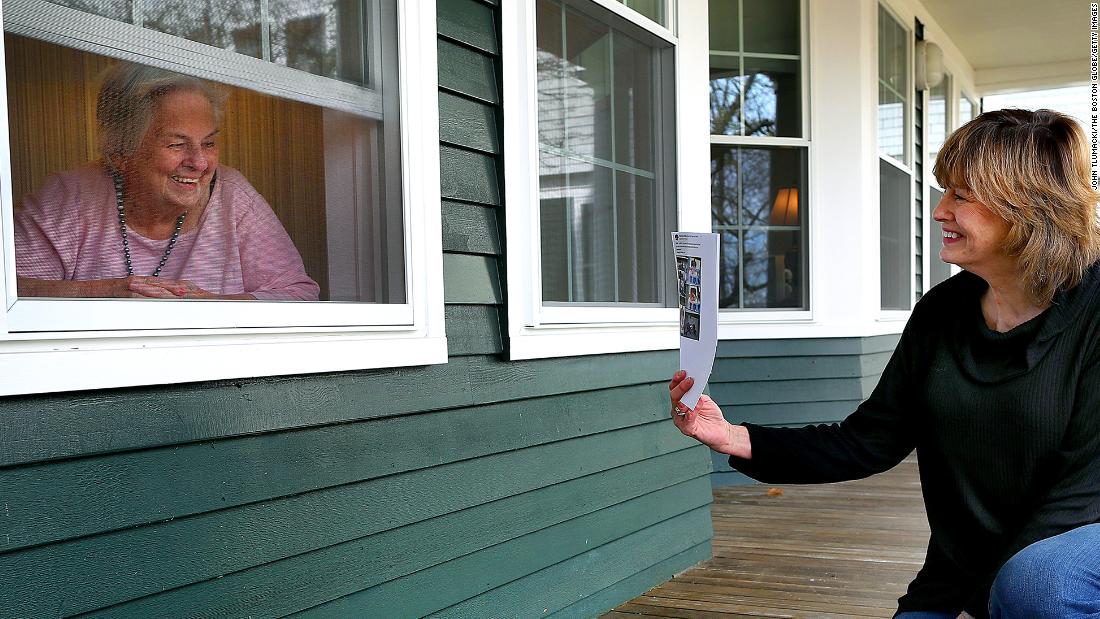 But often facilities won’t disclose how many residents and employees are infected with the coronavirus that causes the disease, citing privacy considerations. Unable to visit, families can’t see for themselves how loved ones are doing.

Are people getting enough to eat? How are their spirits? Are they stable physically or declining? Are staff shortages developing as health aides become sick?

Perhaps most pressing, does a loved one have Covid symptoms? Is testing available? If infected, is he or she getting adequate care?

“This is the problem we’re all facing right now: If you have family in these facilities, how do you know they’re in danger or not?” Jorge Zamanillo told the Miami Herald after his 90-year-old mother, Rosa, died of Covid-19 only days after staffers said she was “fine.”
In recent weeks, amid mounting concern, states including California, Connecticut, Illinois, Massachusetts and New York began releasing data about cases and deaths in individual nursing homes. (The data varies by state.) And the Centers for Medicare & Medicaid Services said it would require homes to report cases to the Centers for Disease Control and Prevention and to notify residents and families. (Previously, facilities were required to report only to states.)
Families’ worst fears have been expressed in recent headlines, including a New York Times story that described “body bags piled up” behind a New Jersey nursing home where 70 residents had perished. Another investigation called nursing homes “death pits” and reported that at least 7,000 residents across the nation had died of Covid-19 — about 20% of all deaths reported at the time, April 17.

What can families do? I asked nearly a dozen long-term care advocates and experts for advice. They cautioned that the problems — lapses in infection control and inadequate staffing foremost among them — require a strong response from regulators and lawmakers.

“The awful truth is families have no control over what’s happening and not nearly enough is being done to keep people safe,” said Michael Dark, a staff attorney at California Advocates for Nursing Home Reform.

Still, experts had several suggestions that may help:

With virtually all visitors barred from nursing homes since mid-March, frequent contact with loved ones via telephone calls or video visits has become even more important. In addition to providing much-needed emotional support, it signals to staffers that family members are vigilant.

“When a facility knows someone is watching, those residents get better care,” said Daniel Ross, senior staff attorney at Mobilization for Justice, a legal aid agency in New York City. “Obviously, the ban of visitors is a real problem, but it doesn’t make family oversight impossible.”

If a resident has difficulty initiating contact (this can be true for people who have poor fine-motor coordination, impaired eyesight or hearing, or dementia), he or she will need help from an aide. That can be problematic, though, with staff shortages and other tasks being given higher priority.

Scheduling a time for a call, a video chat or a “window visit” may make it easier, suggested Mairead Painter, Connecticut’s long-term care ombudsman.

Advocacy group AARP is pressing for Congress to require nursing homes to offer video visitation and to provide federal funding for the needed technologies. If you can afford to do so, buy a tablet for your loved one or organize a group of families to buy several.

More than likely, other families have similar concerns and need for information. Reach out through email chains or telephone trees, suggested Richard Mollot, executive director of the Long Term Care Community Coalition in New York City.

Ask your nursing home administrator to update families weekly through a conference call or Zoom video chat. Explain that families will probably call less often with repetitive questions if communication is coordinated.

Many nursing homes have family councils that advocate for residents, and they’re potentially valuable conduits for support and information. Your long-term care ombudsman or administrator can tell you if a council exists at your facility.

Working with a group can reduce the fear that complaining will provoke retaliation — a common concern among families.

“It’s one thing to hear ‘Mrs. Jones’ daughter is making a big deal of this’ and another to hear that families of ‘everyone on the second floor have noted there’s no staff there,'” Ross said.

Every state has a long-term care ombudsman responsible for advocating for nursing home residents, addressing complaints and trying to solve problems. While these experts currently are not allowed to visit facilities, they’re working at a distance in this time of crisis. To find your ombudsman, go to The National Consumer Voice for Quality Long-Term Care’s site.

Twice a week, Painter holds an hourlong question-and-answer session on the Connecticut Long-Term Care Ombudsman Program’s Facebook page. Among dozens of questions that people asked last week: What kind of communication can I expect when a family member is Covid-positive and in isolation? What’s the protocol for testing, and are homes out of test kits? Could families get a robocall if a resident died?
One person wondered whether installing cameras in residents’ rooms were an option. This practice is legal in eight states, but facilities may consider this elsewhere on a case-by-case basis. A fact sheet from The National Consumer Voice for Quality Long-Term Care lays out the pros and cons.

“Most of what we do is trying to work out better communication,” Painter said. “When there are staffing issues, as there are now, that’s the first thing that falls off.”

Usually, Painter advises families to take concerns to a nurse or administrator rather than stew in silence. “Tell the story of what’s going on with the resident,” she said. “Identify exactly what the person’s needs are and why they need to be addressed.”

If you think a family member is being ignored, talk to the director of nurses and ask for a care plan meeting. “Whenever there’s a change in someone’s condition, there’s a requirement that a care plan meeting be convened, and that remains in effect,” said Eric Carlson, a directing attorney with Justice in Aging, a legal advocacy organization.

If that doesn’t work, go “up the facility’s chain of command” and contact the corporate office or board of directors, said Robyn Grant, director of public policy and advocacy at The National Consumer Voice for Quality Long-Term Care.

If you’re getting nowhere, file a complaint with the agency that oversees nursing homes in your state. (You can refer to this directory from the Centers for Medicare & Medicaid Services, the federal agency that oversees nursing homes.) This is a formality at the moment, since the Centers for Medicare & Medicaid Services has temporarily released agencies from the obligation to investigate most complaints. Still, “there may come a day when you’ll want a written record of this kind,” Dark advised.
Complaints that are getting attention from regulators involve “immediate jeopardy”: the prospect of serious harm, injury, impairment or death to a resident. “If you believe your concern rises to that level, make sure to indicate that,” The National Consumer Voice for Quality Long-Term Care advised.

Also, contact local, state and national public officials and insist they provide Covid-19 tests and personal protective equipment to nursing homes. “Calls, letters — the lives of your loved ones depend on it,” said Dr. Michael Wasserman, president of the California Association of Long Term Care Medicine.

Some nursing homes are asking families to take loved ones out of their facilities and bring them home. Every day, all day, Dark said, he gets calls from California families in this situation who are distraught and terrified.

Families need to think through these decisions carefully, said Dr. Joanne Lynn, policy analyst of the program to improve eldercare at Altarum Institute, a research organization. What if their loved one becomes ill? Will they be able to provide care? If their relative has dementia or serious disabilities, can they handle the demands such conditions entail?

Researchers in Ottawa, Canada, have developed a useful decision aid for families, available from The Ottawa Hospital Research Institute. (Americans can ignore the Canada-specific information.)

At the very least, “get plans in place in case your relative has a bad [Covid-19] case. People can go from stable to serious illness within hours in many cases,” Lynn said.

This involves updating advance directives, including whether your loved one would want cardiopulmonary resuscitation, mechanical ventilation, transfer to the hospital in the event of a life-threatening health crisis or hospice care, should that be indicated.