Are these fast, cheap coronavirus tests the game-changer everyone is waiting for? 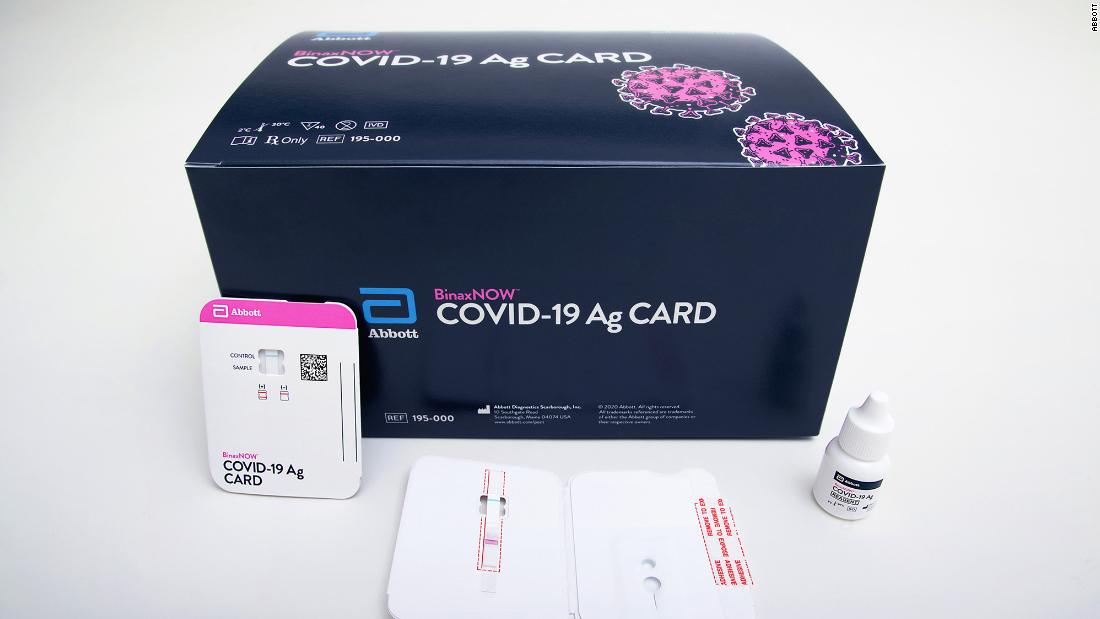 The US Food and Drug Administration granted emergency use authorization to another antigen test this week, bringing the total to four.

Compared to the most commonly used type of coronavirus test in the country — molecular diagnostic tests, also called PCR tests — antigen tests don’t need complicated chemicals, viral transport media or RNA extraction kits. They don’t necessarily require appointments at specialized labs, highly trained technicians, or certain machines. And they can provide an answer in minutes, rather than hours or days.

Problems with any one of these critical PCR test components have led to bottlenecks for the entire process since the start of the pandemic, frustrating patients, doctors and public health experts alike.

Antigen tests work a little differently. “The PCR molecular tests actually test for the virus’ genetic material and the antigen test is testing for one of the viral proteins, so a piece of the virus,” said Dr. Jonathan Quick, managing director for pandemic response, preparedness and prevention at the Rockefeller Foundation.

Because of that, they’re not as reliable as traditional PCR tests. According to the CDC, “Antigen tests are more likely to miss an active coronavirus infection compared to molecular tests.”

Dr. Robert Murphy, a professor of infectious diseases at Northwestern University and the executive director of the Institute for Global Health, is a fan.

“The antigen tests are not PCR and can never be as sensitive as one of those, however, they are much faster — approximately 15 minutes — and don’t require the PCR supply-chain of reagents which is also problematic. The cost is lower because the test is much more simple,” he explained.

And unlike the first three antigen tests approved, the newest antigen test to join their growing ranks, BinaxNOW, is “the first COVID-19 diagnostic test that a health care provider can perform without an analyzer, meaning that test results can be read directly from the testing card,” according to the FDA.

Abbott, the manufacturer of the test, said in a news release the new test returns a result in 10 minutes. It’s about the size of a credit card and will cost around $5. The company said it’s planning to ship tens of millions of tests in September, ramping to 50 million tests a month at the beginning of October.

That’s a big jump from our current testing capacity. According to data from the COVID Tracking Project, the U.S. conducted a little over 4.7 million tests last week. While that might sound like a lot, that still adds up to fewer than 20 million tests a month, and it’s far less than the million-plus tests per day some public health experts say we should be doing.

When antigen tests finally arrive in great enough numbers on US shores — which should happen within the next three months, according to the experts — it could be a turning point in the pandemic for the country, a step on the road back to normalcy.

Quick, who literally wrote the book on ending epidemics, says the PCR test will always have a role as a highly accurate diagnostic test, but the antigen test will be used as a screening test for asymptomatic people. He called antigen tests a “paradigm shift” and “disruptive innovation.”

“We estimate that we need about 5 million tests a week for the continuing lab-based diagnostic [test] and about 25 million a week for asymptomatic surveillance testing. And so it’s the antigen test, because they are a low cost, fast, and some of the recent ones highly accurate and convenient. So that combination really is what we need to get the scale we need, and the turnaround,” he said.

A question of accuracy

While the antigen tests are not as accurate as the PCR tests, they are getting much better. “There are four on the market as of today,” said Murphy, noting that they range in sensitivity — their ability to identify true positive cases — between 84% and almost 98% of the time, with three of the four hovering around a respectable 97%.

But to some, giving quick results more than makes up for any shortfall in sensitivity.

“If you wait a week [for your result], you almost might as well not have bothered to do it, because you’ve infected all these people. It kind of defeats the whole purpose of having the test done. Whereas if you could pick up 80% of the people in 15 minutes, and just keep testing and testing, that will have a bigger public health effect than some really super test that takes one or two weeks to get the results back,” said Murphy.

He said he’s “a little bit dumbfounded” that it has taken the country this long to get these rapid tests, which are in widespread use in countries like South Korea and India. “These recent tests have been game changers. And so we’re seeing the power and the potential of innovation,” he said, adding that part of pandemic preparation is having these tools ready “to go on the marching path.”

Other experts aren’t convinced the tradeoff between accuracy and speed is worth it.

“I’m very concerned about the hype over the last 24 hours about a new test from Abbott. It’s come out that this particular test is cheap, it’s quick and it’s effective. Let me just be really clear about this: I would not want to use this test on someone with clinical disease,” Dr. Michael Osterholm, director of the Center for Infectious Disease Research and Policy at the University of Minnesota, said on CNN Friday.

Osterholm compares it to the rapid flu test, which “achieves about 50 to 70% positivity among those with influenza” and which he doesn’t recommend using. “I see no reason why this is going to be different. So, this new heralded testing is a little bit smoke and mirrors,” he said. He also notes that only 102 people were sampled in the material Abbot submitted to the FDA to get the EUA.

Osterholm said he’s concerned that the country will also see “a big drop in the number of positives” if the test only picks up 50-70% of cases, creating a false rate of infection. “So even that is a challenge this week in how it is being touted in the public,” he said.

The White House announced a $760 million deal Thursday to buy 150 million tests from Abbott, which it said will “be potentially deployed to schools and to assist with serving other special needs populations, according to an HHS statement.

And just over a week ago, the US Department of Health and Human Services announced it was invoking the Defense Production Act (DPA) — a Cold war-era law that gives the president the emergency authority to direct private companies to prioritize orders from the federal government — to get fast coronavirus tests from two other suppliers, Becton Dickinson and Quidel, to roughly 14,000 certified nursing home in the US.

In the upcoming months, expect to see many more antigen tests joining the current ones. “They’re coming and there’s dozens of them,” said Murphy. He’s part of an initiative at the National Institutes of Health called Rapid Acceleration of Diagnostics or RADx. At the end of July, the NIH announced that it had invested nearly $250 million in seven companies for new Covid-19 testing technologies through RADx.

“It’s about ramping up all the tests… And that’s just the first seven of dozens. And so, we expect the testing capacity to increase radically by the end of the year… It’s kind of like Operation Warp Speed with the vaccines. It’s going like gangbusters,” he said.

‘Don’t use the test to get complacent’

The impending tsunami of cheaper, faster and more readily available tests comes just as the US Centers for Disease Control and Prevention quietly updated its Covid-19 testing guidelines to say asymptomatic people may not need a test, even if they’ve been exposed to the virus.

And testing has been trending down a bit. The rolling daily average actually dropped to 611,382 on August 23 from its peak of approximately 822,000 tests on July 29, according to the COVID Tracking project.

The change to the CDC guidelines was quickly denounced by public health experts, who say more, not less, testing is needed.

“As some of you know, the CDC posted on its website recommendations on quarantine, and on testing, that are frankly not scientifically supportable, and this was done apparently at the behest of people in Washington,” former CDC director Dr. Tom Frieden said during a Thursday news briefing.

He called the changes “dangerous.”

Quick agreed that surveillance testing is of utmost importance, and antigen testing as at the forefront of that effort. “It’s absolutely vital because what it’ll do is let us identify those who are carrying the virus — about 20% are asymptomatic, 30, 40, 50 even in some cases — so we can get them out of circulation, we can trace their contacts,” he said.

Yet despite Quick’s enthusiasm about antigen testing, he has one big caveat: “What’s really important is that people don’t use the test to get complacent, because the tests aren’t going to do anything to change the virus,” he said. “And so the personal protective habits need to keep up, in terms of masks and handwashing and distancing and avoiding crowded indoor places.”

In other words, we may still have miles to go before we reach the land of normalcy.