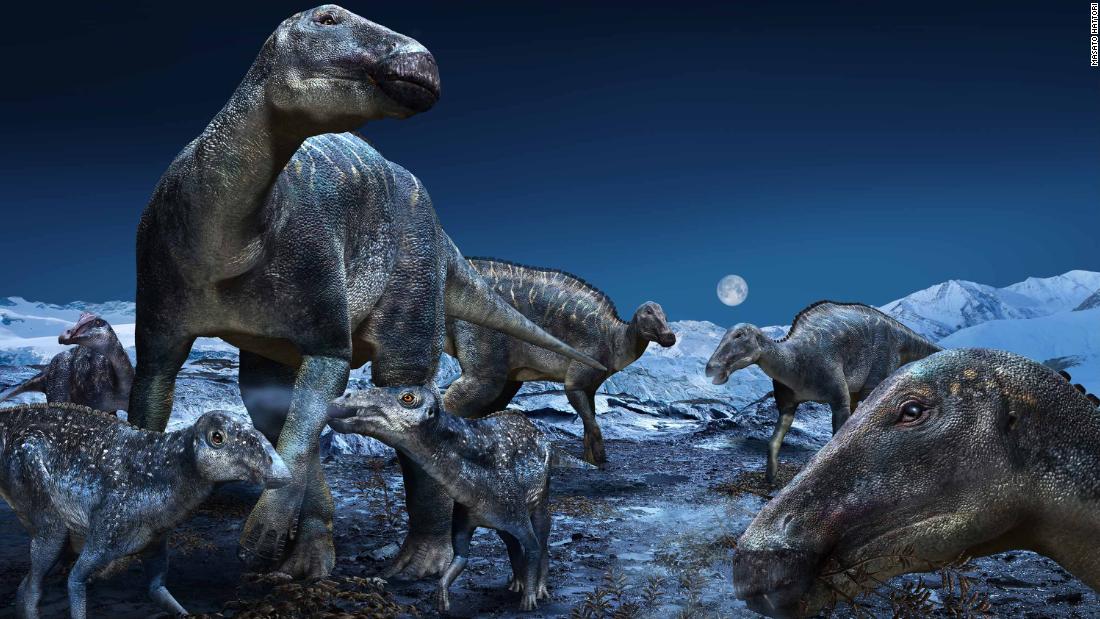 Paleontologists said a new dinosaur discovered in Hokkaido, Japan, in 2019 called Kamuysaurus is a close cousin of the plant-eating Edmontosaurus — a type of duck-billed hadrosaur commonly found in the fossil record. It’s known as the “caribou of the Cretaceous” because of their large numbers and wide range, which stretched from Colorado to Alaska.

The new research suggested that the family of dinosaurs known as the Edmontosaurini may have crossed the pathway from North America to Asia and adapted to the arctic environment. The creatures that traveled to North America evolved into Edmontosaurus, and those that stayed in Asia and moved on to Japan are believed to have evolved to become Kamuysaurus.

“They were incredibly successful dinosaurs,” said paleontologist Yoshitsugu Kobayashi of Hokkaido University Museum in Japan and an author of the study that published Wednesday in the journal PLOS ONE.

“It’s fascinating to think they likely used the ancestral Bering Land Bridge between Asia and North America for migration in a manner similar to mammoths, woolly rhinoceroses and early humans.”

What’s more, the study found that what was thought to be a new species of polar dinosaur identified in 2015 in Alaska was in fact an Edmontosaurus, which was named after the city in Alberta, Canada.

After studying huge numbers of hadrosaur bones in museum collections across the world, the team suggested the arctic dinosaur, which was named Ugrunaaluk in 2015, had been mistakenly declared a new and unique species based on juvenile traits.

“This study is a wonderful example of why paleontologists need to be more aware of how individual growth and life stage of fossils matter when we try to interpret the anatomical features preserved in them, said study coauthor Ronald Tykoski, director of the paleontology lab at the Perot Museum of Nature and Science in Dallas.

Tony Fiorillo, chief curator of the Perot Museum of Nature and Science and another coauthor, said there were big differences between young and mature dinosaurs of the same type.

“When you look at your face at five years, and as an adult, there are changes. When we look at dinosaurs, we need to look at adult forms, too. They only looked at juvenile bones, and we found that some characteristics change as they mature.”

Given its wide range, Fiorillo said that Edmontosaurus would have been able to adapt to a wide variety of environmental conditions, and evidence suggested they may have thrived in polar regions.

He told CNN that footprints found in Alaska suggested multiple generations of the dinosaurs lived in herds — although the climate would have been warmer than today’s Arctic — similar to that found in Seattle. However, they still would have had to contend with long periods of darkness. Fossils suggested that their bones did not grow uniformly — with growth perhaps stopping in the winter.

Fiorillo said the Edmontosaurus and its close kin would have had a “substantial spread” across northern parts of the world 70 million years ago.

“It’s not unrealistic to compare them to generalized animals today — such as mountain sheep, wolves and cougars in terms of their range and numbers — that also roam greater geographic distributions,” he said in a statement.