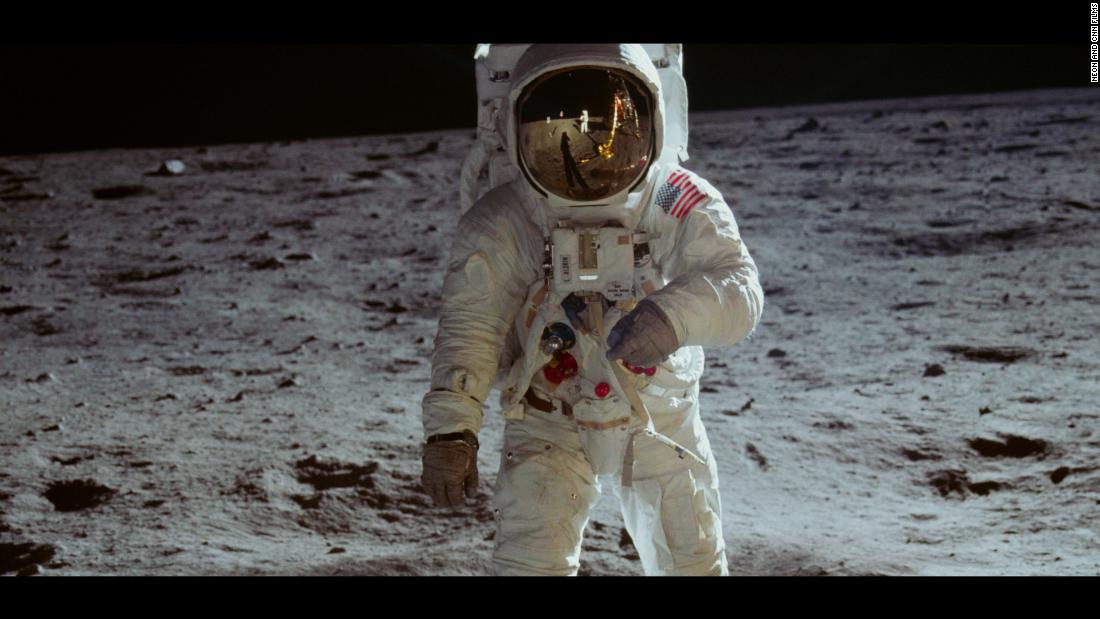 But you haven’t seen everything.

Director and editor Todd Douglas Miller was researching the 1969 mission when he and his team uncovered film reels that had been stowed away in government vaults for nearly half a century.

They didn’t really know what they had until they took some of the reels to New York, where they could use a special scanner to reveal the visuals in all their glory: The reels contained pristine, large-format footage shot at the time of the moon launch.

“When we saw those first images come off the scanner, that’s when we really knew. It was jaw-dropping, to say the least,” Miller said. “We were just absolutely astonished. It was incredible.”

The team used a new technology developed by Final Frame production company to transfer the stunning film into 4K, 8K and even 16K high-resolution digital formats that would resonate on 21st-century screens.

The result is a documentary that gives new clarity to the legacy of humankind’s first moon landing.

“It’s important to understand exactly what happened in a historical context,” Miller said. “We wanted to make something that was a testament to the mission itself and would entertain people.”

Here are eight moments from “Apollo 11” that might show the monumental mission in a new light:

But that familiar scene took on new meaning for Miller during the making of the documentary, he said.

“(It’s) one of the first that we actually scanned from the negative, the suiting-up shots,” he said. “And they’re just absolutely stunning in their quality. But what really got me was how emotional the astronauts were in the looks on their faces. To see it in that kind of quality — the entire weight of what they’re about to do and the emotion of what they’re going through — written on their faces.”

The moment was made all the more striking for Miller because he’d seen what the astronauts looked like during a dry run two days before the launch.

“They were just joking around; it didn’t seem like it was going to be any big deal,” Miller said. “But on the day of the launch, July 16, 1969 … to see that stoic look on their faces just hits you like a wave. It did the first day I saw it, and it does every single time I see it. It’s just incredible.”

2. Seeing the people whose stories haven’t been told

The hundreds of thousands of people who worked on the Apollo space program were mostly white men, and the news media conveyed that. But there were many women and people of color involved in the Apollo missions, Miller said, though that’s not what we’ve been shown over the past 50 years.

For example, aerospace engineer JoAnn Morgan was the first woman to work in NASA’s launch center in Florida, according to the space agency, and during the launch of Apollo 11, she oversaw spacecraft guidance computers and operational communications and TV systems. She “ended up having a 43-year career with NASA,” Miller said, becoming the Kennedy Space Center’s first woman senior executive.

We know Apollo 11 was a bigger deal than previous NASA missions, which is why the event drew VIPs from around the world to Kennedy Space Center to watch the fiery blast-off.

“There are some Easter eggs in there, too, which I won’t give away,” Miller teased. “I see someone new every time I watch the film.”

The documentary shows Armstrong’s historic first steps in a way most of us have never seen.

Sure, the film includes those well-known blurry, slow-scan TV images of Armstrong from the side, climbing down the ladder of the lunar lander. That film was shot automatically by a camera that popped out of the vehicle.

But what many don’t know is that Aldrin was filming Armstrong, too; he captured those monumental steps from above, while inside the lander, looking down the ladder at Armstrong.

Apollo fans and experts have long known about this angle. But the public hasn’t previously seen it uncut and in high-resolution, a view that expands our knowledge of the mission.

“It always irritates me to see that edited and chopped up,” Miller said. “It’s one of the greatest shots in cinematic history.”

Originally, the film shot for the mission didn’t have sound. “There wasn’t a really efficient way to sync sound back then, and it didn’t really make sense. NASA cameramen were really there to capture b-roll, basically,” Miller explains, referring to contextual, background shots.

But as the filmmaking team worked on the documentary, they got their hands on about 11,000 hours of NASA audio files, many of which offer new perspectives on what the crew and Mission Control were thinking and doing in real time.

While they were painstakingly syncing up the audio with the corresponding film scenes, Miller’s team noticed how excited the astronauts were when they caught sight of truly awesome space events, like the sun rise over the Earth and a solar corona, when ribbons of sunlight pop out from behind the moon.

Keep in mind that the Apollo crew was make up of former military fighter pilots; they were all business. Their dialogue almost always was about completing the mission. So, for something to distract them from their job, it had to be pretty amazing.

“Neil Armstrong has been asked in interviews, ‘What was your most idyllic moment from the mission?'” Miller said. “And it wasn’t stepping foot on the lunar surface, it wasn’t getting home safely. It was seeing the moon about 100,000 miles out and seeing a solar corona happen. And you heard that when you heard the onboard audio from the astronauts, you heard them describe that.”

Although there was no film of these specific events from Apollo 11, filmmakers found similar shots from later Apollo missions and synched the crew audio.

“We put it in the film. We got to show it to Buzz Aldrin, (and) he got to comment on it,” Miller said. “We could restore it a little bit more and approximated to exactly what it looked like. Little moments like that for me, as a fan and as a filmmaker, were really exciting to put on screen.”

6. Cinematography by the astronauts

Collins, who piloted the main part of the spaceship — aka the command module — captured a remarkable moment that’s included in the documentary.

Somehow, he was able to shoot film out the window of the ship while the lunar lander carrying Armstrong and Aldrin approached from the surface of the moon.

It was “a terribly harrowing exercise,” Miller said. “Anytime there are two spacecraft trying to dock with each other, it’s risky business.”

Although we’ve seen this maneuver on film before, we’ve never seen it this clearly, and it gives us an even better sense of why Collins, Armstrong and Aldrin were named honorary members of the American Society of Cinematographers for their work on the mission.

By piecing together images and audio, filmmakers managed to confirm the true direction the spaceship was pointing during much of the journey. Although it was traveling between the Earth and the moon, the ship was not pointed in the direction of travel.

Researchers found a document through the Massachusetts Institute of Technology that revealed Apollo 11 was actually pointed toward celestial north en route to the moon, Miller said, “and it was spinning like a top.”

The crew oriented the ship in relation to the sun to prevent the spacecraft from getting too hot or too cold. The Apollo 11 mission controllers called it a “rotating restaurant,” or “barbeque roll,” but the maneuver was officially known as passive thermal control. And yet so many depictions of Apollo show the ships pointing directly at the moon.

Although it was already known, the film’s researchers basically rediscovered what the true position of Apollo 11 was during the 250,000-mile trip, Miller said.

“Obviously, people knew it, but I think the way it gets depicted in the media is often wrong,” Miller said. “So, this is the right way.”

If you were traveling to the moon, wouldn’t you want to bring your music with you? Of course, you would.

The Apollo 11 crew was no different.

The astronauts brought with them a little device called a Sony TC-50. It was basically an early kind of Sony Walkman, Miller said, which played cassette tapes loaded with the astronauts’ favorite music.

Miller’s team discovered the source of Aldrin’s jam during the meticulous research of Apollo’s onboard audio tapes.

“Anytime the guys were out of communication with Earth, they would flip on an onboard recorder,” Miller said. That recorder picked up Aldrin’s mix tape playing a tune by folk artist John Stewart called “Mother Country.”

The song “really became an anthem for all of us on the team,” Miller said. “What it speaks to is this kind of rediscovery of America and what it means to travel.”

Miller aimed for the film to be technically accurate as well as entertaining and inspiring.

“If people can use our film as a primer for future space travel,” he said, “… that would be pretty awesome.”