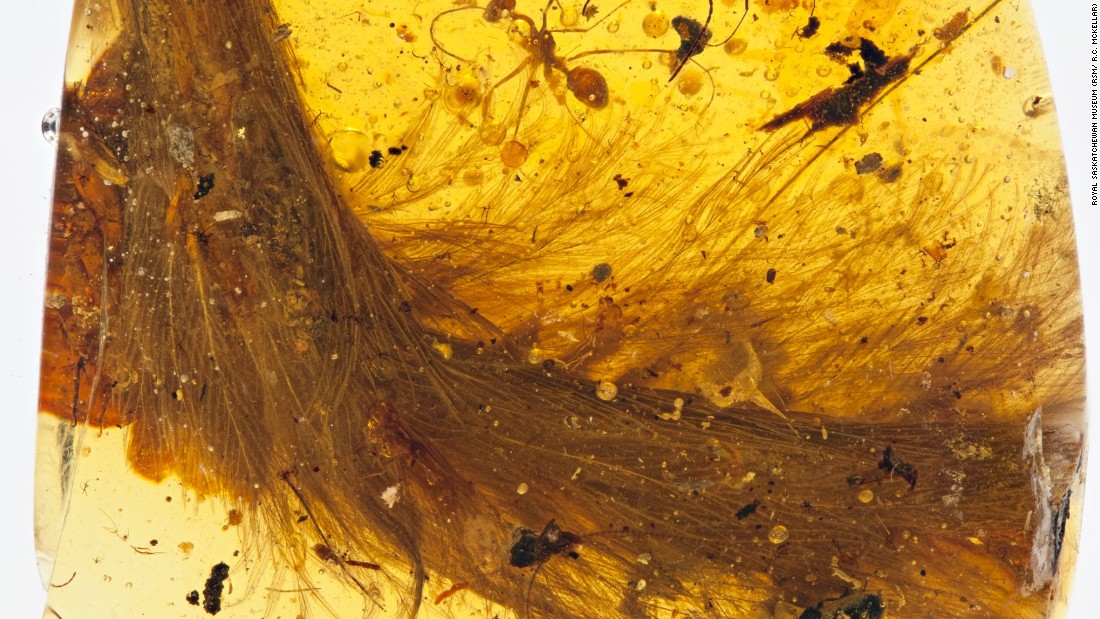 But it’s the tiniest fossils that have transformed paleontology over the past five years.

They offer a tantalizing, three-dimensional look at dinosaur times. The vivid creatures and plants look like they just died yesterday with soft tissue in place and details like skin, coloring, feathers, teeth, leaves and petals exquisitely preserved — details that are often lost in the crush of fossils formed in rock.

But this treasure comes with baggage.

Richest deposits are in a country marred by civil war

Amber is found in several places around the world, but amber deposits dating from the time before dinosaurs went extinct are rare. Some of the richest deposits have been found in Myanmar’s Kachin State, in the northern part of the country, near the border of China. Government forces and ethnic minorities have fought in this region for years.

In 2017, Myanmar’s military, which stand accused of genocide against the Rohingya ethnic group in the west of the country, began seizing control of the amber mines from the indigenous Kachins, adding to the strife.

“There is evidence of human rights abuses that are directly linked to the mining of amber, and I would say as paleontologists, but also as people, we have to think of the ethical implications of what we do,” said Emily Rayfield, a paleobiology professor at the University of Bristol’s School of Earth Sciences in the United Kingdom and president of the Society of Vertebrate Paleontology (SVP), an organization dedicated to the study of vertebrate fossils.

The society is calling on colleagues to refrain from working on amber sourced from Myanmar since June 2017, when the military took over the mines. It has also asked more than 300 scientific journals to stop publishing research based on amber fossils found since that date.

“We do not condone promoting our scientific endeavor at the expense of people facing humanitarian crisis,” said Rayfield and other society leadership, in a strongly worded letter to journal publishers in April.

The society’s members expressed concern that many prized Burmese amber specimens end up in private hands through commercial trading, rather than public institutions, making it difficult for scientists around the world to study them.

But while many people in the field agree with the aims of this stance, others say the move is premature, will do little to improve the situation in Myanmar and may mean that many significant finds could be lost to science.

The ethical issues surrounding the study of amber fossils are complicated by other factors. Since many amber specimens end up in private hands, it’s difficult for paleontologists to verify what colleagues have discovered from a fossil. What’s more, scientists haven’t studied the soil in areas in Myanmar where the amber is being dug up — making it harder to accurately date the amber.

Burmese Amber has been mined in Kachin State for hundreds of years. But, according to researchers, trade in the material really took off 10 years ago thanks to demand for the semiprecious gem from China.

The discovery of a dinosaur tail entombed in amber found by Chinese paleontologist Lida Xing at a market in Myanmar near the Chinese border grabbed headlines in 2016, and this, along with other finds, has been a further driver, Rayfield said. (Still, finding vertebrates like dinosaurs or lizards is extremely rare.)
In Chinese, the gem is known as “blood amber” for its deep red color, the phrase is apt for its parallels with blood diamonds — gems used to fund conflict in Africa.

Like jade and rubies, amber is a resource that may have played a role in conflict between the Kachin Independence Army, one of a number of rebel armies in Myanmar that has controlled and administered a large swath of territory for years, and Tatmadaw, the Myanmar military’s official name.

A 2018 document from a United Nations Human Rights Committee fact-finding mission detailed torture, abductions, rape and sexual violence by the Tatmadaw in the amber mining region between November 2017 and April 2018. Victims and witnesses of hostilities said the aim was to appropriate amber and mining resources under the KIA’s control, according to the UN report.
A spokesman for the Myanmar government did not respond to CNN requests for comment. In 2019, Myanmar rejected a draft resolution on its domestic human rights situation at the UN Human Rights Council in Geneva, which, according to the state-run Global New Light of Myanmar, the country said was based “on the one-sided narratives, highly politicized and seriously flawed reports of the FFM (fact-finding mission).”

Paleobiologist George Poinar, professor emeritus at Oregon State University College of Science’s department of integrative biology, believes Burmese amber should continue to be studied because it provides a unique portal into life that existed in dinosaur times.

“Otherwise, scientifically valuable fossils will end up in carvings and jewelry and be lost for future generations,” Poinar wrote in a paper he co-authored.
Poinar has worked on amber fossils for decades, first discovering that amber could preserve intracellular structures in an organism trapped inside in a 1982 study. His work inspired the fictional science in the “Jurassic Park” movie franchise, where DNA is extracted from dinosaur blood inside a mosquito trapped in amber.

While he doesn’t dispute that atrocities have been committed against ethnic minorities in areas where amber mining takes place, Poinar said there’s no evidence that “money from the sale of Burmese amber fossils is was being used in acts of aggression against minority groups within the country. “

Instead, based on interviews with miners and traders, he said the great majority of Burmese amber containing fossils was and still is smuggled into China where it’s sold legally in markets, especially in the city of Tengchong, near the border with Myanmar.

“I think the action of the SVP was premature,” he told CNN via email. He hopes that journal editors will reconsider the “clause in the SVP paper forbidding papers on Burmese amber fossils from being considered for publication.”

He’s not the only voice against the move. A letter signed by more than 50 scientists published in August said that a boycott will be disruptive, especially to those early in their career, and will do little to remedy the situation in Myanmar or improve the ethics of paleontological research.

“Science serves to extend the knowledge of humankind. With Burmese amber as one of the most important windows into the Cretaceous Period currently available, not examining, evaluating and publishing it would mean withholding knowledge about history of life on Earth,” said the letter.

While amber containing dinosaurs and other vertebrate fossils is rare and does command high prices, amber containing smaller specimens like plants and insects are often sold for less than $100, according to the authors. Moreover, the situation on the ground in Myanmar in complicated, and there are mining regions not under the control of the military, the letter added.

Particularly up in arms are paleoentomologists who study prehistoric insects. The International Palaeoentomological Society issued a statement in June that said the measures proposed by the SVP could be counterproductive.

“A boycott on commercial trading, museum acquisitions and scientific publications will not help the people of Myanmar to overcome their current difficult circumstances,” the statement said.

“Instead, it will result in an increase of illegal trade, loss of scientific material/information and accumulation of fossils in private collections with a huge drawback for science in Myanmar and the rest of the world.”

It added that editors of scientific journals must not take on the role of censors.

Papers based on what scientists call inclusions in amber are still being published but given the pace of scientific research and the peer review process, most of them are based on amber specimens found before 2017 — before the proposed moratorium.

The journal Acta Paleontologica Polonica (APP) will not consider any papers on Burmese amber collected from 2017 onward, while the Journal of Systematic Palaeontology has gone a step further, saying it will no longer publish any research based on Burmese amber fossils.

Nature, which publishes some of the field’s most prestigious peer-reviewed research, has declined to issue a blanket ban.

Nature stands “firmly against persecution and oppression around the world, and we are committed to enabling our authors to publish rigorous, reproducible research that is conducted to a high ethical standard,” the publisher said in a statement to CNN.

“When assessing manuscripts describing fossil specimens, editors of the Nature journals carefully consider each situation on a case-by-case basis, taking into account guidelines, regulations, standards and laws within the field and region.

“We can and do reject papers if they do not meet any of our editorial policy requirements — including in cases where our editors and expert reviewers consider that the authors have not provided sufficient evidence that fossil collection was done in a responsible manner and in accordance with relevant permits and local laws.”

Phil Barden, an assistant professor at the New Jersey Institute of Technology, published a paper last month based on a piece of amber from Myanmar that contained an unusual prehistoric ant. It was sourced from Myanmar before 2017, and he said that his lab will only work on fossils that are from before the proposed boycott time frame.

“I think the SVP letter was well-intentioned and agree that we need standards in place to prevent scientific research from supporting or indirectly condoning unethical behavior at any scale,” he said. “I believe we need more information and consultation with the people of Myanmar to develop an effective mechanism.”

“While some species may not be recovered by the scientific community and, thus, may find their final resting place in a necklace or ring (which I’ve seen numerous times), my suspicion is that some people will continue to work on these fossils, regardless of a proposed boycott,” he said via email.

Other paleontologists are glad the SVP has taken a strong stance on the issue.

“There is absolutely no reason why a fossil, no matter how important, must be valued more than human life,” said Alessandro Chiarenza, a paleontologist and research associate at University College London , via email.

Rayfield, the SVP president, said her members want to encourage people to think about where the amber they work on comes from and to investigate supply chains and the provenance of the material.

Right now, it’s up to each museum or each individual scientist to decide which specimens to purchase, and doing due diligence work in somewhere like Myanmar is far from easy.

“This is a moving situation. Things may change in the future. We’re not placing any blame on any individual,” Rayfield said. “Now, with the information to hand, to think about ethical implications of what you’re doing and whether it’s worth it right now to science.”