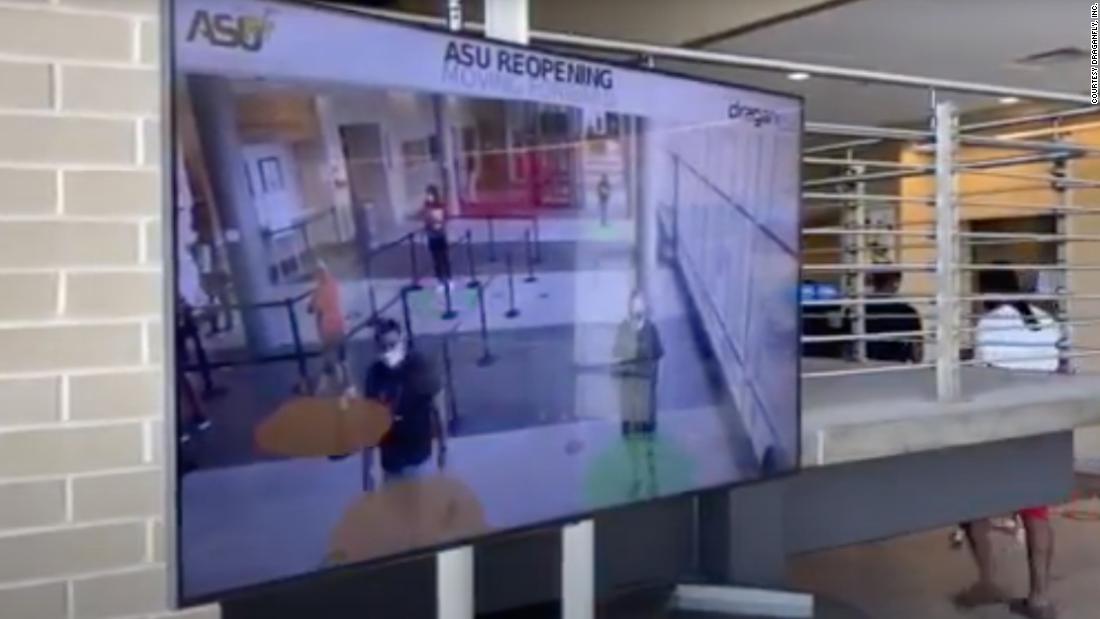 Several high-tech screening stations being installed Tuesday in high-traffic areas, such as the campus food court, are designed to read a person’s temperature, heart rate and respiratory rate from 3 to 4 feet away. Another set of machines at the university can show a live video feed of people walking or standing nearby and mark a red circle on those who aren’t staying 6 feet apart.

But these devices won’t catch anyone who’s spreading the virus without symptoms. According to a July 10 report from the Centers for Disease Control and Prevention, an estimated 40% of Covid-19 patients do not show symptoms.
Still, during a week when Alabama is seeing an upswing in the seven-day average of new Covid-19 cases, and the University of Alabama reported 1,200 positive cases on its campus, Alabama State University is hoping this is one more tool to help it avoid becoming the next hot spot.

So far, Quinton Ross Jr., president of Alabama State University, told CNN there are no known cases of Covid-19 on his campus. With 4,000 students and 900 faculty and staff members, the university in Montgomery is much smaller than the University of Alabama in Tuscaloosa, where the rising cases of Covid-19 among nearly 10 times the population had prompted the mayor of Tuscaloosa to temporarily shut down all bars.

“Here at Alabama State University it’s really embracing a culture shift,” Ross said, regarding the mandatory mask mandate, and testing of all students, faculty and staff before they returned to campus.

Universities across the country are attempting a combination of mask mandates and other rules to curb the spread of the virus, even in some cases testing wastewater to detect Covid-19 in the sewage coming from particular buildings.

Ross said the installation of five thermal scanners and five social distancing rigs adds one more layer of protection to an already stringent set of campus rules and reduced capacity in any face-to-face classroom instruction.

Each thermal scanner costs about $20,000, and each social distancing rig costs about $10,000, according to a representative for Draganfly, the company that makes these stations. The stations at ASU are paid for through money received from the CARES Act.

While many devices can offer temperature readings, Draganfly said its screening technology allows the reading of one’s heart rate and respiratory rate, among other vital signs, from a distance of 3 to 4 feet. The technology measures blood volume changes, like when a person blushes. The change in certain colors can be used to time one’s heartbeat. The technology also measures shoulder motion to see when someone inhales or exhales to detect respiratory rates.

If someone exhibits symptoms similar to those of Covid-19, the person is then taken aside for further evaluation to see if he or she need to be re-tested for coronavirus.

Dr. Amesh Adalja, senior scholar at Johns Hopkins Center for Health Security, told CNN the presence of high-tech screening stations is more a show of force than something that can single-handedly make a significant difference in detecting Covid-19.

“There are a lot of companies that are trying to market some of these products that I think go really above and beyond what actually has value, when it probably is the simple, cheap stuff that probably has the most value,” Adlaja said.

He said an iPad to screen for a person’s temperature, paired with questions about their symptoms, can be just as effective in detecting someone with Covid-19 symptoms.

But one positive side effect of the screening stations might be in changing people’s behavior.

“It may have this kind of other benefit, in which people … who might be having mild symptoms, who otherwise would still try to go about their activities in daily life or go to work, they may be less likely to do that knowing they may face some kind of screening,” he said.

Still, Adlaja said there could be a false sense of confidence if people pass the screening. Many people experiencing mild or no symptoms can still spread the virus.

Cameron Chell, the CEO of Draganfly, said he compares the solutions to Covid-19 to Swiss cheese. Each layer may have its holes, but he says these stations are an added layer of protection.

“The other option is to is to do nothing or, you know, to rely on testing every single person all the time, which isn’t necessarily an effective solution either,” Chell said.

Ninety-one percent of the ASU student body is African American, a point that State Sen. Bobby Singleton said highlights the need for the installation of the screening stations.

Chell said Draganfly is working with dozens of schools to set up similar stations. It is also working with half a dozen clients on a drone program, similar to one that was tested in Westport, Connecticut, in April. That pilot program quickly ended when critics, including the American Civil Liberties Union, cited privacy concerns.

The stations set up at Alabama State screen only those who give their consent. Draganfly said it does not collect their personal information, but daily statistics are sent to the university.

“I consider myself ‘Big Brother’ because I do want to know who is his positive or negative on this campus,” Ross said, “because that drives the decisions that we make on a daily basis, and we want to make sure that our campus is safe.”