A difficult week ahead in the coronavirus fight begins with a US death toll nearing 10,000 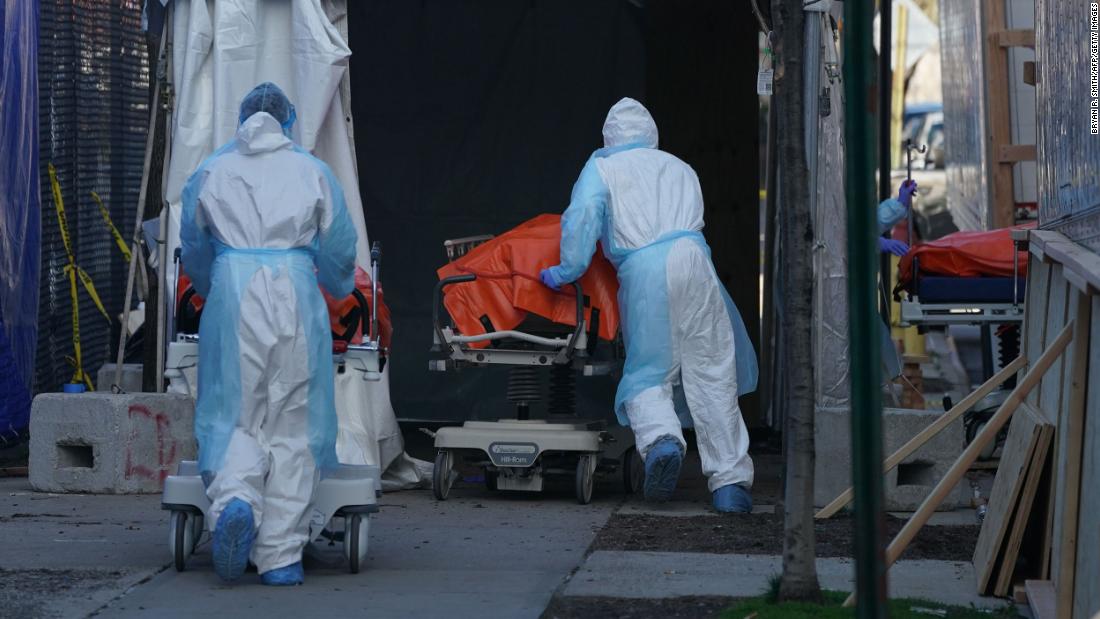 Despite measures to enforce social distancing and supply medical workers with the resources necessary to treat patients, “we are struggling to get (the pandemic) under control,” Dr. Anthony Fauci of the National Institute for Allergy and Infectious Diseases said Sunday on CBS’s “Face the Nation.”

“I want Americans to understand that as hard as this week is going to be, there is a light at the end of the tunnel,” US surgeon general Vice Admiral Jerome Adams said on “Fox News Sunday.”

Still, the weekend brought some promising news in New York, the state reporting the most cases and deaths.

Gov. Andrew Cuomo reported a drop in the daily number of reported deaths in the state on Sunday for the first time in days. He also said ICU admissions and daily intubations were down and the hospital discharge rate was “way up.”

But Cuomo cautioned that it is still too soon to determine if the trend will hold, calling the developments “a few signs that are a little hopeful” that the state is approaching its peak in cases and will begin to plateau.

Across the country, state leaders are still scrambling to pull together enough resources to battle the outbreak.

The coroner’s office and mortuaries in New Orleans have reached their limit, said Mayor LaToya Cantrell. She’s asked the federal government for additional refrigeration. The city is also responding to the influx of patients by converting its convention center into an emergency hospital set to open Monday.

There were more than 13,000 reported cases of coronavirus and 477 deaths in Louisiana early Monday.

Louisiana Gov. John Bel Edwards said Sunday his state could run out of ventilators by the end of the week if cases continue to surge.

Hard hit Pennsylvania saw an increase of 1,494 cases Sunday, the governor’s office said, bringing the statewide total to more than 11,500. New Jersey reported another 3,482 cases on Sunday for a total of 37,505. At least 917 people have died in the state, New Jersey Gov. Phil Murphy’s office said.

This week is Holy Week in the Christian faith, leading up to Easter. And with the Jewish holiday of Passover beginning Wednesday evening and the Muslim holy month of Ramadan later this month, those urging social distancing are warning against gatherings that go against coronavirus guidance.

“I know it’s a very difficult thing, as a Catholic, Easter Sunday for me next week, Palm Sunday today,” Walsh said. “But that is not what we need right now. We need prayers right now, that’s what we need.”

Many states have made exemptions from stay at home orders for religious gatherings. And even in states that haven’t, some church leaders are still holding service.
Rev. Tony Spell of Life Tabernacle Church in Baton Rouge, Louisiana, was charged last week with violating the state’s ban and Sunday he gathered again with 1,200 people.

“We don’t get our rights to worship freely from the government. We get those from God,” Spell said Sunday. “We’d rather obey God than man.”

Other institutions are holding services virtually to maintain safety and spiritual connection.

Under the weight of the pandemic, individuals and officials are seeking innovative ways to help those most affected.

The Department of Veterans Affairs will open more than 1,500 beds for civilians at hospitals in multiple states to alleviate the burden on hospitals under siege from coronavirus, according to VA Secretary Robert Wilkie.

Aid from the VA will be distributed in New York, New Jersey, Louisiana, Michigan and Massachusetts.

Elsewhere, additional personnel, hospital beds and medical equipment are being brought in with the hope of relieving the growing strain on medical workers like Dr. Sneha Topgi, who works in an emergency department in Brooklyn.

She describes an emergency room where it seems almost every patient, no matter what they originally came in for, is found to have coronavirus and where medical professionals are maneuvering through hallways where patients are put in beds and stretchers.

Staff writes their name on the body-covering personal protective equipment they wear so patients have some sense of connection with the people treating them.